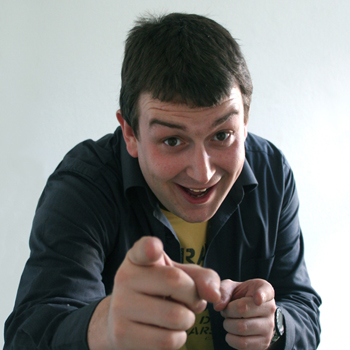 One of the hottest rising talents on the comedy circuit, Craig hails from Dewsbury, West Yorkshire.  He's naturally a charming northerner, an instant crowd-pleaser with a unique mock-confrontational style.
He's had a meteoric climb through the comedy ranks.  From the moment he reached the final of 'The Other Side New Act of the Year' competition he was on a career ascendant and three months later reached the final of the coveted  Hackney Empire New Act of the Year.
Now the unforgettable face of the plus.net ads on TV, Craig is equally at ease as an actor/compere as much as performing as a stand up comedian.
He cut his comedy teeth as resident compere at award-winning London club 'The Funny Side...of Covent Garden'   sometimes dealing with tough audiences with aplomb and sharing the stage with some of the very best comedy acts in the business. He's been up there as a support act with Harry Hill, Stewart Lee and even the legendary Robin Williams.
Craig rapidly honed his skills as a compere and soon developed the knack of being able to turn a crowd from an inattentive, lacklustre mob to a happy, receptive audience, clapping, cheering and ready to laugh all night. As a Master of Ceremonies, he is in demand for corporate events and awards.
His impressive stage presence will keep any audience focused and, with his contemporary northern wit and charm he's guaranteed to have audiences eating out of his hand and eager for more.
In the last two years Craig has extended his acting career and appeared in a comedy film alongside Adam Hills and Brendon Burns.  He has also recorded a comedy pilot for the BBC.
Craig is now a highly sought-after act and compere,  performing in clubs all over the UK and is in demand for corporate entertainment.