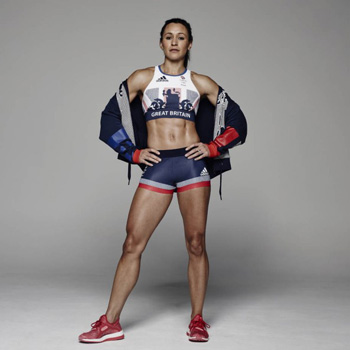 Jessica Ennis-Hill was the poster girl for the 2012 London Olympics, She recovered from a career-threatening injury to become one of the best all-round female athletes on the planet, winning Gold for the heptathlon.
In 2008 she had suffered a stress fracture to her right foot which ruled her out of the Olympics. She consequently had to relearn the long jump, taking off with her left foot instead of the right.
Jessica was born in Sheffield, South Yorkshire in 1986.   During the school holidays in 1996, Sheffield was playing host to an Aviva Startrack scheme and Jessica joined in with enthusiasm.  That got her into athletics and she hasn't looked back since.  She went on to join the City of Sheffield Athletic Club when she was 11, and avidly took part in the junior and youth competitions, showing immense promise as a multi-eventer.
In Berlin in 2009 Jessica became the World Champion in the women's heptathlon event with a personal best of 6,731 points.
She competed at the 2003 World Youth Championships in Sherbrooke, Quebec, Canada in July and the 2004 World Junior Championships in Grosseto, Italy, but it was her winning performance at the 2005 European Athletics Junior Championships in Kaunas, Lithuania that brought her to prominence. At her first senior championships  in Turkey in 2005 she won the bronze medal.
More athletic victories followed and in her first outdoor competition of 2009, Jessica broke her personal best taking her into third place on the UK all-time lists of heptathletes.
Jessica went into the 2009 World Championships in Berlin as a resounding favourite, The pressure didn't affect her performance with Jessica leading from the first event to the last.
The pinnacle of her career to date was winning the Olympic heptathlon gold medal at London Olympic 2012.  On her way to gold she scored her personal best career points as well as taking the national record. She came 1st in 100m Hurdles, 200m and 800m Race. She came 2nd in Long Jump, 5th in High Jump, 9th in Shot Put and 10th in Javelin.
Jessica received a CBE in the 2013 New Year Honours List and became Dame Jessica Ennis-Hill in the 2017 New Year's Honours List.
Read More