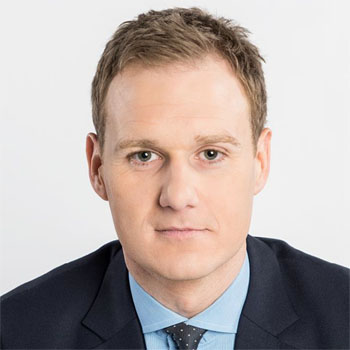 In 2018 Dan hosted his first game show for BBC 1 called Chase the Case; the 20 part series saw Dan test the gameplay, wit and intelligence of 5 contestants in this brand new quiz format.

Since working for the BBC Dan has gone on to do many things sports related- covering Wimbledon, The Grand National, Royal Ascot, The Derby, and the 6 Nations. He has continued to work on domestic, European and international football (including every major tournament since 2006) has also co-hosted the broadcaster’s Open golf coverage for the last 10 years and he was an integral part of the BBC's Olympic offering in both London 2012 and Rio 2016.

During the summer of 2018, Dan presented a special World Cup version of Football Focus as well as numerous live games for the BBC from Russia. In 2019 Dan was asked by Comic Relief to help raise funds by climbing Kilimanjaro with a number of other famous faces – the resulting documentary for BBC 1 called “Return to Kili” followed the teams fund-raising journey.

Later in 2019 Dan was honoured to be asked to present A Royal Team Talk: Tackling Mental Health for BBC 1 with HRH The Duke of Cambridge. Together, with five A-list footballers including Gareth Southgate, Danny Rose and Peter Crouch, they gathered together for an extraordinary and honest conversation about men's mental health, the programme was incredibly well received and subsequently has gone on to be nominated for several awards.

Dan has hosted The One Show, Songs of Praise and appeared on shows such as Countdown, The Chase, Celebrity Mastermind and A Question of Sport.

An inspiring corporate speaker for your event.