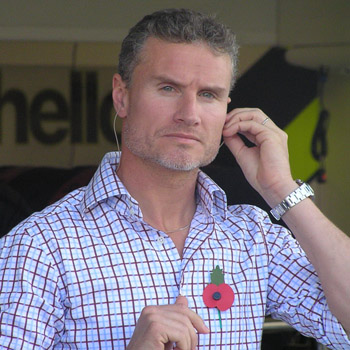 Scottish Formula One racing driver David Coulthard won 13 Grands Prix in a career spanning 15 seasons during which he raced for Williams (1994-1995), McLaren (1996-2004) and Red Bull (2005-2008). By the time he retired from driving in 2008, he notched up 535 points, making him the highest scoring British driver of all time.
His early racing career was equally impressive. David dominated Britain's junior Formula Ford categories in 1989 and became the first ever recipient of the McLaren Autosport BRDC Award for young drivers. In 1991 he fought a titanic battle with future Formula 1 rival Rubens Barrichello for the British Formula 3 Championship, and won the prestigious Macau F3 Grand Prix.
He joined the Williams Formula 1 team as a test driver in 1993, and after competing in eight grands prix for the team in the 1994 season he became a full-time F1 driver in 1995. That year he won the Portuguese Grand Prix and finished third in the championship.
After moving to McLaren, David took his new team's first win in three seasons at the 1997 Australian Grand Prix. In all, he scored 12 of his 13 grand prix wins and 51 of his 62 podium finishes with McLaren, and, after supporting team-mate Mika HÃ¤kkinen to the drivers' championship in 1998 and '99, he finished runner-up to Michael Schumacher in 2001.
In 2005 David moved to the newly formed Red Bull Racing team. By the time he retired from Formula 1, in 2008, he had notched up 535 points, making him the highest scoring British driver of all time. David stayed on as a consultant to Red Bull and also acts as an ambassador for Mercedes-Benz.
David Coulthard returned to racing, driving in the DTM series in 2010 in a 2008 Mercedes-Benz C-Class for MÃ¼cke Motorsport. As well as competing in the DTM, David regularly appears as a pundit on BBC TV's Formula 1 coverage and is much in demand as a speaker, covering topics including motivation, teamwork, customer service and technology.
Read More