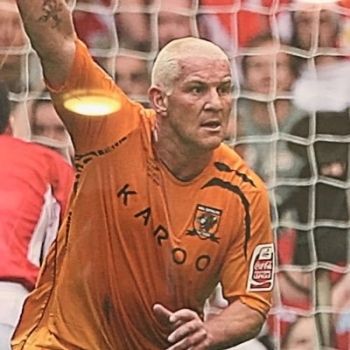 The former Hull City, Middlesbrough, Aberdeen and Bradford City striker who probably made the headlines more for his off pitch problems than on pitch success.
Starting his professional career at the age of 22, Dean had previously joined Hull City as YTS trainee whilst holding down a part time job and playing non league for Ferriby United. He spent 4 years with the club before financial difficulties led to his sale to Aberdeen in 1995.
In 78 appearances he scored 23 goals and became a very popular member of the team and with supporters.
A club record signing followed with a move to Oxford City before his first move to Bradford City in 1999 as part of Paul Jewell's promotion hunting team, securing the runners up spot and taking Premiership status for the 1999 2000 season the first time Bradford had been in the Top Flight for 77 years.
Dean ended the season as City's top scorer and Bradford avoided relegation with a 1-0 win over Liverpool on the final day of the season.
A move to Middlesborough, including loan spells to Sheffield Wednesday and United followed, and then returning to Bradford City, before a move back to Hull City FC, scoring the £60m goal that sent them into the Premiership.
Post football, Dean is a regular pundit and match summariser for Sky Sports, as well as contributing to local and national newspapers and sports shows.
His autobiography, Deano -  From Gipsyville to the Premiership has been published whch documents his "dark times battling with alcohol".
Read More