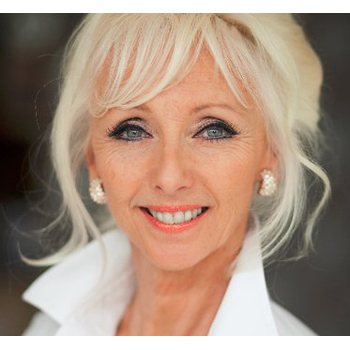 The very lovely Debbie McGee is available to host events, awards ceremonies and after dinner speeches.  Undoubtedly the star of Strictly Come Dancing 2017 and recently seen on Masterchef, The Chase, Antiques Road Trip, Celebrity Canals and BBC 2's The Pilgrimage.

Although best known for her appearances on Strictly and as the assistant and widow of magician Paul Daniels, Debbie was first and foremost a dancer and for three years was artistic director of her own ballet company.

Debbie McGee was born in 1958, in Kingston upon Thames. Her parents ran a corner shop but later, her father worked for a large manufacturing firm making gold rings and other jewellery.

She enjoyed music, dressing up and performing from an early age, so her mother enrolled her in a dance school when she was seven. When she was 16 Debbie auditioned for, and won a place at, the Royal Ballet School. After graduating, she joined the Iranian National Ballet Company in Tehran. Aged 19, she became part of the Corps de Ballet and later a soloist, but her ballet career was brought to an abrupt halt by the Iranian Revolution. She was forced to flee the country and returned to the UK with little in the way of money and possessions. Seeking new work she auditioned for the Bernard Delfont Organisation, which was responsible for a number of big summer resort shows and touring productions.

Delfont found her a job performing on stage with magician Paul Daniels in his 1979 summer show in Great Yarmouth.

She later joined Dougie Squires's Second Generation dance troupe, which involved touring Europe with acts including Chris de Burgh and James Last. After winter work in pantomime, Debbie again joined Paul Daniels for his 1980 summer season in Bournemouth. She then performed in his London stage show It's Magic, which was the longest running magic show in the West End.

Debbie McGee achieved national and international fame through television appearances with Paul Daniels. BBC producer John Fisher asked Debbie to appear in the BBC One series The Paul Daniels Magic Show. The series continued until 1994 and regularly attracted audiences of 15 million in the UK and was sold to 43 countries. Paul Daniels regularly referred to his assistant on his TV shows as "The lovely Debbie McGee", a phrase that entered popular culture as a stereotype for magicians' assistants. Paul and Debbie were married in Buckinghamshire in April 1988.

Debbie McGee has performed magic herself on the corporate cabaret circuit.

Her pastimes include golf and she has played in celebrity charity events and she has collaborated with novelist Susan Wilson on a number of books.