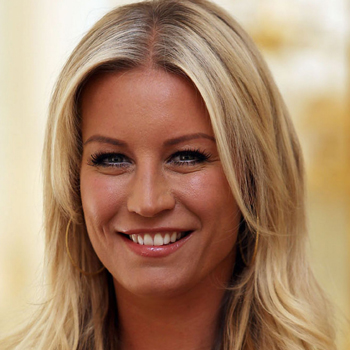 Denise Van Outen has enjoyed huge success on screen and stage since her first break came in 1996 by way of Channel 4's hit show, The Big Breakfast, where she joined as a Presenter.

Stage success soon followed with starring roles in Chicago (West End and Broadway), Tell Me on a Sunday (West End), Legally Blond (West End) and Rent (West End), in addition to her debut independent film role with Tube Tales (1999), whilst also staring in the hugely successful sitcom, Babes in the Wood. Another film role was soon to follow, as she went on to star in in Love, Honor and Obey (2000).

Denise’s success on Broadway gave her a taste for the US and she headed to LA to front NBC’s Grease: You’re the One That I Want!, before work quickly drew her back to the UK after a personal call from Lord Andrew Lloyd Webber resulted in her joining the panel for BBC1’s Any Dream Will Do! and I’d Do Anything (2008).

As if 2008 wasn’t busy enough she was honoured to co-host and performed with Michael Buble for ITV’s One Night Only, as well as hosting Hairspray: The School Musical, on Sky One.

Whilst pregnant with her, now seven year old daughter Betsy, Denise designed and launched her own maternity clothing range with Very. She has also written a book about her experiences of pregnancy called Bumpalicious, and a follow up ‘Adventures of Parenthood’ in May 2012.

Denise was a lead judge on the ITV’s talent show Born To Shine and reached the final of BBC One’s Strictly Come Dancing in December 2012, in addition to staring in the UK film, Run for Your Wife.  Denise embarked on a West End run of her one woman show Some Girl I Used to Know.

In 2015 Denise landed herself a role on Eastenders as part of the shows 30th Anniversary celebrations and presented her own series Denise Van Outen’s Christmas on the Food Network.

Most recently Denise has enjoyed being a Judge on the first ever Irelands Got Talent, airing in early 2018. Alongside her regular panellist role on ITV’s Loose Women, Denise also hosts online chat show, The Show for ITV and Matalan in addition to regularly appearing on some of the UK’s favourite panel shows such as Celebrity Juice and 8 Out of 10 Cats.

Denise is a passionate fundraiser, and in the past three years has embarked on huge personal challenges that saw her climb Kilimanjaro, cycle 187 miles across parts of India and most recently completed a Himalayan trek in search of the Dalai Lama.