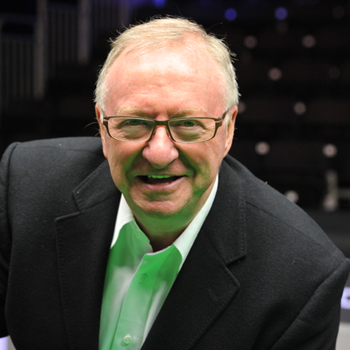 Dennis started to play snooker at 9 years of age in his home town, Coalisland, Northern Ireland. He moved to England at the age of 17 to work - not play snooker.

By the age of 14 he was the best billiards and snooker player in his local area. He won the British Junior Billiards title in the 1967/68 season and turned professional in 1971/72 season.

The big turning point in his career came when he paid his own way to go to Canada to compete in the Canadian Open in 1974. He beat Alex Higgins to get through final - only to lose to Cliff Thornburn.

One of the nicest people on the circuit, Dennis is available for after dinner speaking and golf days.
"Dennis Taylor is one of the nicest, unassuming people you could ever wish to meet. He is the perfect gentleman, attentive with the rest of people on my table, and I speak for all the other 430 people present that with out question he is the best speaker we have ever booked in the 10 years going to St Mary's. He had travelled some four hours to get to us, he was nice and early, and we had to insist that he leave to travel back home, when he was quite happy to stay to the end."  Dennis spoke at the Lighthouse Club Southern Branch Annual Sporting Luncheon - November 2011
"Dennis went down a storm.  It was fantastic that he joined us for the meal and not only that he then stayed for a short while afterwards and everyone was buzzing wanting photos with him and autographs signing a true legend and a gentleman.  The content of his performance was spot on a great combination for all that had everyone in fits of laughter.  He judged the audience well and turned the evening ceremony into the success it was."  Marketing Manager, Kalzip for the 16th Annual Teamkal Conference - November 2011

"Dennis Taylor was absolutely brilliant. Not only did he help us win the golf his conduct of the auction was so professional. We will be back again... You guys are so easy to deal with."
BP International