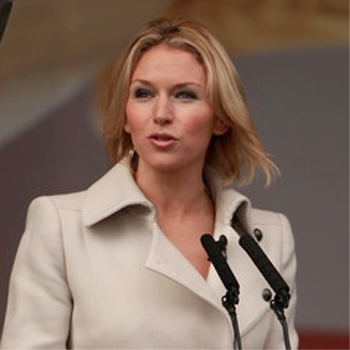 Di is a member of the Sky Sports team, having recently become the host of Sky's 'Golf Night', after previously anchoring Sky Sports News. A huge golf fan, she is pretty impressive on the course herself! She plays off a handicap of 11 and is no stranger to a tournament environment, playing on an amateur team during the Dunhill Links Championship 2006.

Di joined Sky in February 2003 and worked on a variety of sports including golf, tennis, boxing, football and rugby before going on to her current position. She has the integrity and diversity to work in a variety of sports and has a versatility that enables her to work in fields outside of sport also. 2006 also saw her as presenter for the EuroPro Golf tour and the host of Sky Three's 'More Big Ideas' which was the accompanying show for Sky Ones all new Primetime entertainment programme 'Big Ideas'. Alongside presenting Di is an accomplished actress, starring in several ITV drama productions, including 'Family' and 'Cracker'. Her good looks secured her the 2003 Marks and Spencer 'Amore' campaign and an ambassadorial role with TaylorMade in 2005.

Di has also taken the corporate sector under her wing, hosting in the hospitality suites at Twickenham during the Rugby Autumn internationals. Di's professional and friendly manner ensures she is the perfect host to put guests at ease for their pre and post match entertainment. Her thorough approach and skilled interview technique also guarantees thought provoking discussions with the players.

An enthusiastic and lively personality, Di has the confidence and professionalism to light up an event, interview or feature.  She is an experienced, adaptable and polished host for corporate conferences and evening functions, providing the perfect mix of style and professionalism.