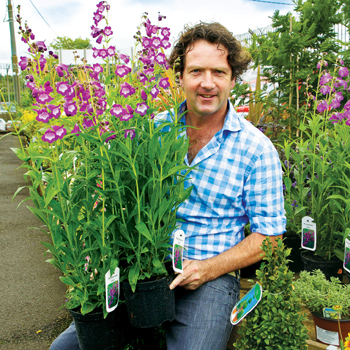 Diarmuid Gavin is one of the mavericks of the world of garden design. His innovative work has helped to make Home Front in the Garden one of television's most watched gardening programmes.

Originally from Dublin, Diarmuid studied at the College of Amenity Horticulture in Glasnevin. Following this, he established his own school of garden design, culminating in the Dublin School of Garden Design.
His work has earned him several awards including the RDS Gold Award in 1991 and 1993 and a Bronze Medal at the Chelsea Flower Show in 1995.

Diarmuid has a very distinctive gardening style. His designs are uncompromising, functional, but startling. For some people, they are too weird and outrageous, but they do show how certain looks can be achieved in small places.
He says: "The gardens we make are akin to some of the more outrageous outfits worn by models on catwalks. Some are there to provoke ideas, thoughts and reactions, but not necessarily to copy."
Diarmuid reckons he's designed about 300 gardens since 1988. "At the moment I average about 20 gardens a year, that's quite a lot for a single gardener. I love the challenge," he says.
One of his favourites is the dramatic shark's fin garden design. Produced for the second series of Home Front, it broke new ground for the programme and Diarmuid. It really caught the public's attention. His gardens draw on a wide range of influences from the work of other designers, such as Roberto Burle Marx, to functional objects, such as sardine cans and oil rigs.
The most important thing to Diarmuid in his garden makeovers is the owner's commitment to the plants. He says: "I want people to understand what we do and how we do it. We want the gardens to go on after we've left."
Despite Diarmuid's flamboyant designs, his own garden is fairly subdued, with an elegant and rectangular lawn.
Read More