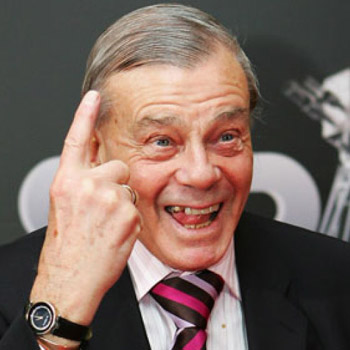 Harold Dennis Bird (born April 19, 1933) is a retired cricket umpire; probably the best known and loved the sport has seen.

The son of a miner, he was born in Barnsley and gained the nickname "Dickie" at school. Always very interested in sport, he dreamed of playing football professionally, and when a knee injury put paid to that, he followed his second love, cricket.
Dickie played for Barnsley cricket club where he met a lifelong friend, future chat show host Michael Parkinson, and in 1956, he signed up with his home county, Yorkshire. Three years later, fed up with always being twelfth man, he transferred to Leicestershire. This move he has since called the "worst mistake of my life" and it was only a few years before he retired, admittedly from a fairly unsuccessful first-class playing career.
Then in 1970 he became an umpire and three years later officiated at his first test match and began really making a name for himself. Calm and entirely impartial when in the field (off it he was a huge Yorkshire supporter), but willing to joke with players, which often dispelled tension. In short he was beloved by cricketers and fans, though he gained a reputation for stopping play for weather and not giving batsmen out lbw.
Dickie was given an MBE in 1986 and later received honorary doctorates from Leeds and Sheffield Hallam universities.
At the beginning his sixty-sixth and final test in 1996, the two teams - India and England - formed a "guard of honour" as he came out and he received a standing ovation from the crowd. Two years later came his last county match, and since then he has appeared on quiz and chat shows and become an author, with his autobiography being the best-selling sports book of all time.
Read More