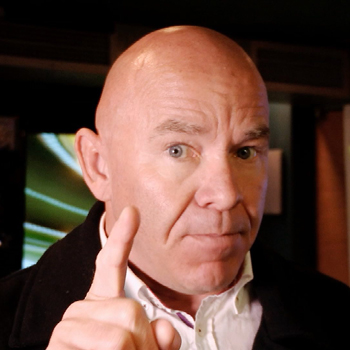 Dominic Littlewood is the presenter of the hugely successful Dom on the Spot for the BBC. He also presents Caught Red Handed and Fake Britain and co presents Right on the Money for the BBC. He was also one of the stars of The Real Full Monty for ITV and men's cancer awareness.

Dom's previous programmes include Don't Get Done, Get Dom and Cowboy Builders and he has been a regular on The One Show since the show started. He was also the presenter of Saints & Scroungers, Beat the Burglar, Wrong Car, Right Car, To Buy or Not to Buy, Flycatchers, How to Holiday, Wrecks to Riches and many more.

Due to his tenacity for tackling companies and cowboy tradespeople head on and his passion for solving consumer problems he currently has one of the busiest schedules in TV. After investigating and reporting on many companies and rogue traders Dominic has an extensive knowledge of their tricks, scams & cons.

Amongst his many hobbies are water skiing, sailing, scuba diving, wake boarding, knee boarding and snow skiing and he will be joining the Clipper Round the World Race for the final leg next year. He thrives on all challenges and competed in the BBC's first ever Celebrity Total Wipeout in Argentina, in which he was narrowly beaten to 2nd place. He took part in BBC1's Strictly Come Dancing and made it through to the sixth round but gladly admits dancing was never going to be his forte. Always up for a challenge he competed the 2014 RideLondon 100 mile cycle race for the charity 'Bliss' in an amazing 5 hours 31 minutes..

Dominic has been a type 1 diabetic for 38 years and has witnessed many changes in the NHS and medical procedures relating to his condition and regularly gives talks on the subject.

After an accident on a remote island in Australia while backpacking around the world aged 25 he broke his neck, Dominic then made a 28 hour journey to hospital for a spinal fusion of his C5 vertebrae and went on to make a full recovery.

He wrote a monthly column for Top Gear magazine and for various magazines & newspapers including, The Telegraph and the UK's number one diabetic magazine Balance, and his book Don't Get Done, Get Dom.

In Channel 4's 'Faking It' Dominic trained a vicar to become a successful sales negotiator. This led to Wrong Car, Right Car on BBC 2 where members of the public were helped to buy and sell cars at dealerships, wearing a hidden ear piece for Dominic to give instructions while filming.

A keen motorcyclist and a passionate lover of American cars, he has imported both new and second hand cars from the USA .

"The evening was a great success. I would highly recommend Dominic, he was very professional, easy to work with and did a great job."  Dominic Littlewood hosted the GoSkills Awards - December 2010

Popular consumer champion with shows like Don't Get Done Get Dom, Cowboy Builders and is a regular One Show contributor.