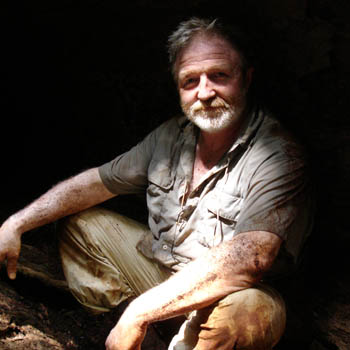 Dr George McGavin is the presenter of Ultimate Swarms for BBC1 and his film Planet Ant: Life Inside the Colony launched the BBC4 Alien Nations season. He also presents the award winning After Life - The Science of Decay for BBC4,  is co-presenter of Prehistoric Autopsy and also fronted Miniature Britain on BBC 1.
An accomplished broadcaster, George has made many programmes for the BBC including the phenomenally successful 'Lost Lands' expedition series. He is also a regular contributor to The One Show (BBC1) and recently presented his first  Radio 4 programme The Etymology of Entomology.
But George grew up with a debilitating stammer. Using a telephone was a humiliating experience for him and he remembers being physically sick after being made to read out loud in an English class at school. There was a period of about a year where he barely spoke at all and then he had some speech therapy.
When he found himself being asked to contribute to radio and television programmes he decided that he wasn't going to let a stammer beat him. Leaving the safe haven of academia in 2008, George embarked on his travels round the world to see and film all sorts of remarkable animals. He still has his stammer but he doen't worry about it any more.
Dr George McGavin is an Honorary Research Associate at the Oxford University Museum of Natural History and a Research Associate of The Department of Zoology of Oxford University. He is also a Fellow of the Linnean Society, The Royal Geographical Society and an Honorary Fellow of The Society of Biology. His research has taken him from the tropical forests of Papua New Guinea to the caves of Thailand and from the jungles of Belize to the savannas of Tanzania. George studied Zoology at Edinburgh University before completing a doctorate at the British Museum of Natural History and Imperial College, London. He has written numerous books on insects and other animals.
Acknowledged as an engaging and entertaining speaker George regularly speaks to audiences about insects, ecology, evolution, conservation and exploration. He has several insect species named in his honour and hopes they survive him.
George's new book Bugs: A Pop-up Journey into the World of Insects, Spiders and Creepy-Crawlies' is published by Walker Books.
Read More