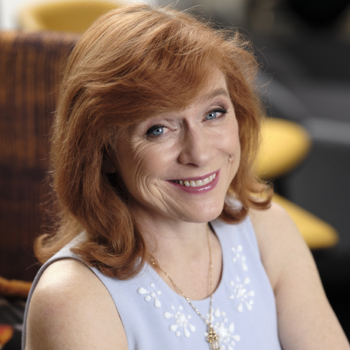 Since the COVID-19 Coronavirus outbreak, Sarah has been in much demand, providing a reassuring voice and reliable medical advise for the nation and beyond. She appears regularly on both Jeremy Vine's Radio 2 Show and his Channel 5 TV programme, and is the resident doctor on ITV's lunchtime news.

Dr Sarah Jarvis trained at Cambridge and Oxford.  She became a GP in 1990 and was a partner in the same practice for almost 30 years.  She now works regularly as a GP locum.  Since 2017 she has been Clinical Director of Patient.co.uk - an international patient information website with 250m visitors per year.

Sarah entered the world of medical media entirely by accident, through work with the Royal College of GPs (first as trainee rep on Council and later as chair of the Women's Taskforce). She still hasn't quite worked out how she ended up in the media spotlight - she did one interview and the phone hasn't stopped ringing since!

She is probably most widely known as The One Show's very own GP, offering advice and information on health issues from medical breakthroughs in hearing aids to long suffering and embarrassing ailments such as chronic hiccups.
She has written weekly columns in national newspapers, appeared for 4 years as ITN Lunchtime News' doctor and spent 11 years on the advisory boards of Update and Doctor.

She is a member of the advisory board for the British Journal of Cardiology and is on the patient group of Heart UK, as well as being a resident doctor on Good Housekeeping and on BBC Radio 2, appearing on Jeremy Vine's programme on Monday afternoons. She also appears regularly on Radio 5 live, Radio 4, Good Morning Britain and ITN lunchtime news.

She has two children and her hobbies include historical re-enactments (with Regency murder mysteries a particular favourite!).

"Sarah was a great speaker"   TPP for the SNUG Dinner

"Thank you very much again for your excellent moderation of the event. You articulately and elegantly presented the issues at stake and skilfully steered the debates. All in all, your moderation was critical to the success of the event."  Roadmap for Sustainable Healthcare Conference in Brussels for AbbVie, Philips and the European Steering Group

Probably most widely known as The One Show's very own GP, Dr Sarah Jarvis appears regularly on TV and radio and is Good Housekeeping's resident doctor.