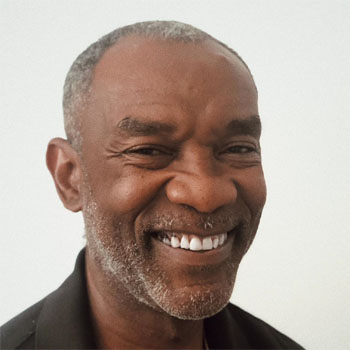 Dudley ‘Tal’ Stokes was the founding member of the Jamaica Bobsleigh Team, immortalised in the film ‘Cool Runnings’. Their trainer was played by the late, actor John Candy.  Dudley is also a successful and serial entrepreneur. An expert in logistics he shares his wealth of knowledge and experience in a direct and easily understood way.

One billion people on TV saw Dudley and his team crash out of the Olympic Games in 1988, Calgary.  Crashing at 80 mph, they skidded down the run for 600 meters.  Many will remember them walking alongside their sled with the onlookers turning their disaster into triumph by cheering them on.

Dudley was devastated. A graduate of the RMA Sandhurst and a pilot in the elite Jamaica Defence Force Air Wing, he was a serial winner. He had taken on the challenge of building the first Winter Sport Team from Jamaica and didn’t expect to fail.

At that time, it felt to Dudley like it was a huge personal failure and he discounted the many mitigating circumstances which led to the crash.  It was a low time for Dudley who headed into a period of depression and reflection. The upside however was that he came out the other end deciding to become a competitive Bobsleigh athlete.

Unfortunately, it soon became apparent that a poor Caribbean nation really had no business in Bobsleigh but were there and they were there to stay...

Focusing on each individual, he maximised each one’s performance, mentally and physically. He also needed to turn his attention to the acquisition of resources to limit the capital required to finance the team’s training.

After six years and two more Olympic Games, The Jamaica Bobsleigh Team were 14th sled (the top seed is 15 sleds) overall in Lillehammer Norway, 1994, 7th nation, and ahead of all-American Sleds. Our budget that year, USD60,000, the USA, USD 6 million.

A serial entrepreneur, Dudley's  first company was "Helitours Jamaica" which was Jamaica’s first helicopter tour company and he built it to 20 employees in 12 years.

He then founded AmLoG, Jamaica’s first third party logistics company and grew it to the largest logistics business in Jamaica.  Supporting manufacturing, construction and tourism sectors, the business employed 200 employees.

This four-time Olympian’s keynote speeches highlight his extensive knowledge of all aspects of logistics, small project management and team building.