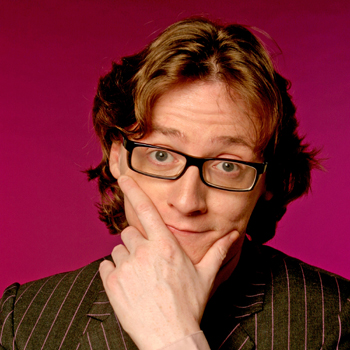 As an observational live stand up comedian Ed Byrne is unrivalled.  He has performed hit UK tours, West End solo runs and developed huge success on the International Circuit.
Ed‘s television career is now in its third decade.  He has consistently been on television since his first appearance on Jonathan Ross‘s Big, Big Talent Show in 1995 but he really grew his audience on the BBC‘s Stand Up Show, establishing him as one of the best stand ups.
Over the years Ed has made some sparkling appearances on Mock The Week, Buzzcocks, Graham Norton Show, Have I Got News For You and Live At The Apollo.  Recently Ed‘s presenting stints on Comic Relief Bake Off has  introduced him to a huge broad range audience
Ed has a passion for the Outdoors (Hill walking and mountaineering are major hobbies) and he has broken into Factual and Natural History broadcasting: BBC Two‘s Volcano Live; Dangerous Roads where he spent 2 weeks driving through Siberia!; abseiling in Snowdonia for The One Show; Dara & Ed‘s Big Adventure which covered Mexico to Panama City; Into The Wild with Gordon Buchanan  and climbing in Skye for Countryfile
Internationally Ed has performed in Montreal, Ireland, France, Singapore, USA, Australia, Norway, Belgium and New Zealand.
Ed performs stand up at many corporate events (hosting awards show or after dinner stand up
Ed ˜s last four tours ˜Different Class‘, ˜Crowd Pleaser‘, ˜Roaring Forties‘ and ˜Outside Looking In‘ have enjoyed storming Edinburgh runs and tour sell outs and his latest show  ‘Outside Looking In‘  tours the UK in 2016.
"Ed was fantastic and everyone really enjoyed him. They said he was the best they have had in the last 3 years! He sat with the rest of the crew and had a laugh and a joke with them and the director of Tesco really connected with him. Please pass on my thanks to Ed from all the team as they thoroughly enjoyed working with him and would relish working with him again."  Saville Audio Visual for Tesco Grocery Suppliers Conference - November 2012
"Ed was fabulous. He was also extremely sociable. Everyone loved him!! It will now be a challenge finding someone for the 2013 awards!!"  Housing Awards - September 2012

'Ed was brilliant. We all had a fantastic time!'  Manning Gottlieb - Ed spoke at their client Christmas Party

Popular Irish comedian with big followings in the UK and Australia. A team captain on Mock the Week who has appeared on everything from Question Time to Live at the Apollo.