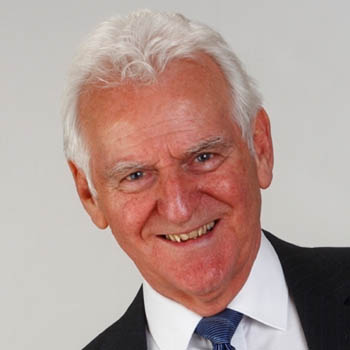 Renowned as one of the country's best and most consistently inspiring motivational speakers.
From 1974 to 1994 he was the British Athletics Federation' s Director of Coaching, where he was widely acknowledged as one of the outstanding sports and athletics coaches in the world.
It was during this period that the GB and Northern Ireland Athletics Team rose to become a genuine power in world athletics, led in particular by track stars such as Sebastian Coe, Sally Gunnell, Tessa Sanderson, Steve Ovett, Steve Cram, Linford Christie, Denise Lewis, David Moorcroft and Daley Thompson.
Frank`s coaching successes include:
Olympic Gold Medalist Daley Thompson
Olympic Silver Medalist David Ottley
Relay teams for GB from 1978 to 1994, winning a medal in every World, European, Commonwealth and Olympic Games.
4 x 400m Gold Medal Winning Mens Relay at Tokyo World Championships (Roger Black, Kriss Akabusi, John Regis, Derek Redmond)
He also created training programmes for Gerhard Berger and Boris Becker.

Frank has combined his talent for inspiring sporting achievement with the business world.  By recognising the synergy between effective coaching techniques on the playing field and in the office, over the years he has developed a range of inspirational keynote speech themes, workshop topics and bespoke employee development programmes that remain as popular and relevant today as ever.

His expertise derives from years of detailed research into individual success and achievement. Frank combines this wealth of knowledge and experience into an informative and motivational approach to achieving long-lasting transformation of both individual and team performance.

Against this history of excellence through coaching some of the best talent in international sport, he has, over the past 20 years of speaking to hundreds of companies around the world, recognised the key areas of personal and professional development which, once taken out of a 'training room' mentality and put into a business context, will lead to individual and team performance advantage, simply by giving a different perspective.
In addition to his existing presentations on Winning, Teamwork, Coaching, Leadership and Talent Development, Frank has created a series of presentations around the London Olympics each embracing his ability to create a Winning Mindset.
Frank is the author of 'Sports Training Principles', 'Winning', 'Winning Lines' and 'Winning Matters'.

The Energy Sector Client team were very impressed. His presentation was fantastic and just what we wanted.

He was a very professional and engaging presenter. Energy Sector Client