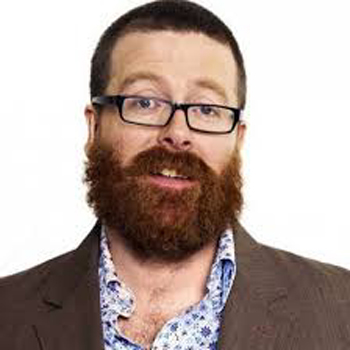 As a recognised face from BBC2's Mock the Week, in addition to his appearances on 8 out of 10 Cats, They Think It's All Over and FAQ U, Frankie Boyle is an established, if sometimes controversial,  name in the world of comedy.

Frankie broke into the comedy circuit in style when he won the Daily Telegraph's Open Mic competition in 1996, before becoming a regular and popular compere at high-profile clubs across the UK. His first performances at the Edinburgh Fringe included headlining 'The Comedy Zone' at the Pleasance and a starring role in 2003 alongside The Reverend Obadiah Steppenwolfe III (Jim Muir) in a show that won praise from both audiences and critics alike.

His stand-up career reached new heights, and his television work took off. After regular appearances on BBC Scotland's Live Floor Show (for which Frankie was also a writer), Frankie appeared as a guest on 8 out of 10 Cats, They Think It's All Over, FAQ U and Mock The Week, for which he is best-known Would I Lie to You and Live at the Apollo.

Alongside his work in front of the camera, Frankie is also a highly-regarded writer. He has written for several series including 8 out of 10 Cats, the UK version of Live Floor Show; 2DTV and 29 Minutes of Fame.

All of this comes in addition to Frankie's radio work. As well as featuring in Miles Jupp's Radio 4 series, Frankie was also team captain in BBC Radio Scotland's Spin on This and Famous for 5 Minutes.

Frankie wrote a weekly column for The Sun, offering an ascerbic take on the week's news for many years.

Frankie's style of comedy is at the stronger end of the spectrum. He enjoys pointing out some of the more  ridiculous aspects of society, the media and politics, often to hilarious effect, although clients are advised that he is not to everyone's taste.

He has also written two books