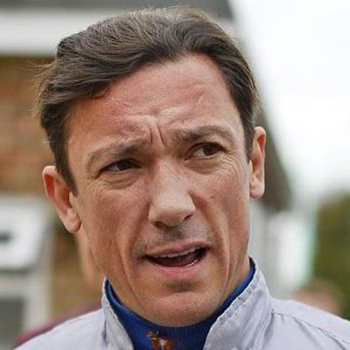 Frankie Dettori is considered a true champion within the sport of horse racing.  A talent of his quality, both within this country and internationally, has not been seen for half a century.

Frankie has ridden in races all over the world including France, Germany, Italy, USA, Dubai Australia, Hong Kong and Japan. Few sportsmen have been so active on a global scale and his victories include associations with great horses such as Lamtarra,  Barathea, Lochsong, Classic Cliché, Mark of Esteem, Singspiel, Cape Verdi, Dubai Millennium and Daylami. Frankie has ridden over 1700 winners world wide and has won prize money in excess of £25 million pounds. In 1998 came 'The Magnificent Seven' at Ascot when he won all seven races on the card.

His best selling book 'A Year in the Life of Frankie Dettori' was published in 1996 and he has made numerous appearances on radio and television.

In 2000 he was made the International Sports Personality of The Year by the Variety Club and he has addressed the Oxford Union.

His story could so easily have ended in tragedy. In 2001, Frankie was aboard a plane which crashed, killing the pilot. Miraculously, Frankie escaped relatively unscathed. He suffered a fractured right ankle and an injured thumb.
He became the British Champion Jockey in 2004 and celebrated with one of his well-known 'flying dismounts'. The same year, he opened a restaurant with Marco Pierre White in Putney, London called Frankie's Bar and Grill.
Dettori finally won the Epsom Derby on his 15th attempt on 2 June 2007 on the horse Authorized. The following day, he achieved a Derby Double when he won the Prix Du Jockey club.
Since then, Dettori has continued racing, winning the British 1,000 guineas in 2011. He was also made an honorary doctor of science for his services to racing by Anglia Ruskin University.