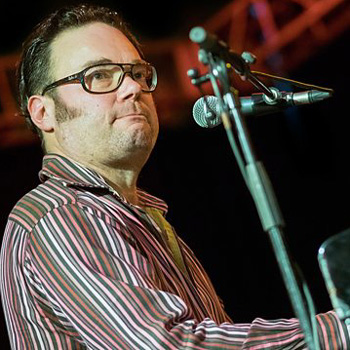 Born in 1968 into a highly musical family, Gareth Williams took up piano at the age of 5. He turned professional after graduating in English literature from Cambridge University in 1989 and went on to study music at London's Guildhall, initially on guitar, later switching to the piano.

It is mainly as a pianist that Gareth has earned a glowing reputation both in the UK and abroad over the past few years, but his singing and guitar playing have increasingly gained recognition in their own right.
His first major professional engagement was as a keyboard player/MD for jazz hip-hop band Us3 (whose most celebrated hit was 'Cantaloop'). He performed with the band on a world tour in 1993 and appears on their album 'Broadway & 52nd' (Blue Note)
Between 1994 and 1999 Gareth worked as pianist/MD for internationally acclaimed jazz singer Clair Martin (several times winner of the British Jazz Singer of the Year Awards). He was also involved in arranging her music, writing original compositions for her band, singing and playing guitar. He appears with her on 'Offbeat' (Linn Records, UK/Honest, US) as well as 'Make this City Ours' (Linn records, UK/Honest, US) which was recorded in New York and stayed at Number One for three weeks in the Gavin Radio Play Charts.
Gareth has also worked with many international jazz greats, including Art Farmer, George Coleman and James Moody, plus top British musicians such as Martin Taylor and Tim Garland.
An original and still current member of the Jim Mullen Quartet, formed in 1996, Gareth's piano playing has been the subject of much media attention. 'Burns' (Black Box), a tribute to Robert Burns has received great critical acclaim; Gareth also appears on their album 'We Go Back' (EFZ Records) and he is also the pianist in the Martin Drew Quartet and features on their latest album 'Got A Match' (Jazzit), a tribute to Ronnie Scott.
As bandleader, Gareth formed the Gareth Williams Trio in 1997. The trio has worked regularly in Britain and has enjoyed several weeks residence at Ronnie Scott's Club in Soho. Featuring Gareth on piano, guitar and vocals, Dave Green on double bass and Tristan Mailliot on drums, the trio released their debut album 'Three' (Jazz House).

It is mainly as a pianist that Gareth has earned a glowing reputation both in the UK and abroad over the past few years, but his singing and guitar playing have increasingly gained recognition in their own right.