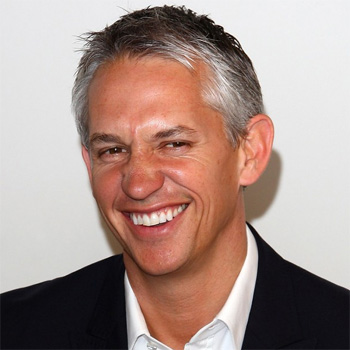 During his playing career, Gary Lineker was one of the best known and widely admired soccer players in the world today. He is also an accomplished cricketer (MCC), golfer and snooker player.

His goal total for his country places him second on the all-time list behind Bobby Charlton. He has addressed the Oxford Union and he was a team captain in the popular quiz show They Think It's All Over. During his spell in Barcelona he learned to speak Spanish.
His BBC Television work has included a roving reporter role at the Atlanta Olympic games, the acclaimed 'Golden Boots' series and as a presenter of 'Football Focus'.
Gary is now lead presenter on Match of the Day Live and he is also the face of the extremely popular and successful advertising campaign for Walkers Crisps. In 2013 he featured in the ancestry programme 'Who Do You Think You Are?'.
Gary spoke at the IoD Winter Sporting Lunch on 12th December 2014 http://www.iod.com/connecting/events/el314-winter-sporting-lunch-2014
Read More