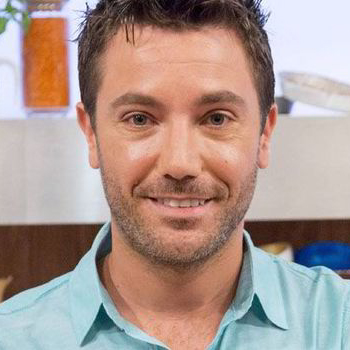 Gino D'Acampo has turned things around. From the boy who cleaned the pizza oven in Naples to the food manager at a Pavarotti reception, the direction of his young life's journey so far could have been very different . . .
Born into a poor Neapolitan family, Gino inherited his grandfather's (a head chef) love of cooking and entered the Luigi de Medici Catering College at the age of fifteen. He continued to develop his skills through the kitchens of restaurants in Europe, including Perignon in Nice and a spell as Head Chef at Sylvester Stallone's Mambo King in Marbella (aged 19) before coming to England the following year.
At this time I was a young Italian guy trying to run a bit too fast, says Gino, and I got involved with the wrong people. I wanted to send money home - perhaps I was keen for them to see how well I was doing - and made the mistake of handling a few things that didn't belong to me.
He paid for this mistake with several months in jail. He had time to think. And he decided that he wasn't coming back to this place - to the disappointment of the staff, who had soon become used to his great cooking.
The shock was his turning point and he resolved to work hard to achieve success the right way, taking on Head Chef assignments in London restaurants - including Pane Vino and The Orchard in Belsize Park - and joining a major Italian food company as Development Chef. He has also developed recipes for Tesco (their Finest range), was Head Chef at the Italian Ambassador's birthday reception and took care of the food at the aforementioned Pavarotti concert reception.
Gino now owns his own import and distribution company, Bonta Italia, and continues as development consultant chef for ready-meals manufacturing companies.
His particular skill in the blending of olive oil led to his first TV engagement with UK Food as a guest on Good Food Live. He was an immediate success and is now, besides making frequent appearances as studio guest chef, a favourite co-presenter. He was also invited to shoot a VT series for Good Food Live called Essential Ingredients , which examined traditional Italian foods and recipes. BBC TV soon took notice of his natural ability and regular appearances on the BBC2's leading food programme Saturday Kitchen quickly followed. 2004 also saw Gino's first appearances on BBC2's Ready Steady Cook, where he started with three straight wins. He also became a hugely popular regular guest on The Terry and Gaby Show for Channel 5 before moving to ITV to present the One Stop Food feature on their flagship magazine programme, This Morning.
Gino's association with ITV grew through 2005 and he featured in two new series, both as co-host and chef: Too Many Cooks found him testing culinary contestants in a battle for survival and in Chef vs Britain he took on talented amateur cooks in the nationwide equivalent of an old-fashioned prize fight.  He also found time to travel to Central America for the UK Food series An Italian In Mexico and to Australia to headline in live shows at the Good Food & Wine Show.
Every year growing stronger, 2006 and 2007 brought Gino another series of 'An Italian Returns to Mexico' and a regular guest on 'Saturday Cooks' for ITV.  Following on from this show, Gino appeared repeatedly on 'Daily Cooks' and 'Soap Star Super Chefs'.  Gino also made an Italian version of Ready Steady Cook and in 2007 his first book 'Fantastico' was published and won Gourmet Italian Book of the Year.
In 2008/9, as well as all the regular TV appearances Gino has worked on two food shows for the BBC - 'Step Up To The Plate' and 'Put Your Menu Where Your Mouth Is'.   His second book 'Buonissimo' was published in 2008.
In 2009 Gino launched his unique set of pots, pans, crockery, knife blocks etc under the 'Gino Influence' brand for|Argos and Matalan. In that same year he was crowned King of the Jungle by 'I'm a Celebrity, Get Me Out of Here.'  His third book 'The Italian Diet', in 2010 was a number one best seller.
Gino still devises his own recipes and regularly visits La Cucina Caldesi in London to update on latest trends in Italy and give talks to some of the students about his experiences. Using only the simplest and freshest ingredients there is nothing Gino likes better than to present live demonstrations.
Gino is a member of both the Federazione Italiana Cuochi (Federation of Italian Chefs) and Associazione Professionale Cuochi Italiani (Association of professional Italian chefs).  He has been involved in some exclusive events including the Gala Dinner for Luciano Pavarotti at his last concert in London in 2002 and a private party for the Italian Ambassador in 2003.
Gino lives in north London with his wife Jessie and two sons who are his favourite food critics.
Read More