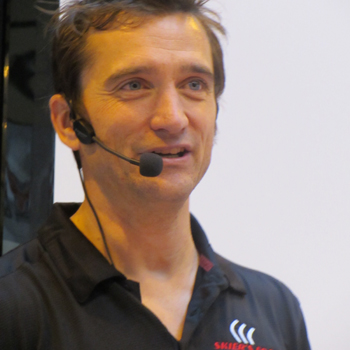 Graham Bell is an Olympic skier, TV presenter, adventurer and journalist who is regarded as one of the finest downhill skiers the UK has ever produced, claiming the title of the Ski Champion of Britain eight times during his competitive career.
The five time Olympian, sports enthusiast and television personality has been at the forefront of winter sport, commentating on the Winter Olympics, fronting the BBC's popular and iconic 'Ski Sunday' and working with a range of organisations and events to support the development of both winter sports and summer sports, including sailing, triathlon events and cycling.  His experience as a presenter and a cameraman  enable him to cover extreme sporting events, as well as winter sports.   He was a key pundit for the BBC's coverage of the World Triathlon Series and has also presented the prime-time sports programme 'High Altitude'.
Graham's boundless enthusiasm, knowledge and experience has seen him appear on a range of great programming and providing coverage of  high profile sporting events all over the world.
Read More