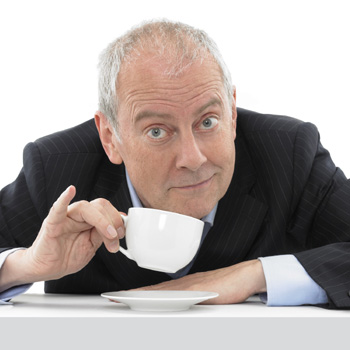 Gyles Brandreth is a writer, broadcaster, former MP and Government Whip - and one of Britain's most sought-after award ceremony hosts and after-dinner speakers.
A reporter on The One Show on BBC1 and a regular on Radio 4's Just a Minute, Gyles is the author of the acclaimed Victorian detective stories  The Oscar Wilde Murder Mysteries, published in seventeen countries around the world and adapted for TV.
Gyles won his first prize as a public speaker as a schoolboy of fifteen. At Oxford, aged twenty, he was elected President of the Oxford Union. At 22, he turned professional and since then he has spoken all over the world, in venues as varied as the Helmsley Palace, New York and Buckingham Palace, London. His audiences have ranged from the executives of Coca-Cola to a silent order of nuns, from a thousand bankers in Frankfurt to ten thousand members of the WI at Wembley Arena. He has featured in the Guinness Book of Records for making the world's longest-ever after-dinner speech. To raise funds for the National Playing Fields Association, he spoke non-stop for twelve and a half hours.
A prolific broadcaster (in programmes ranging from Just a Minute to Have I Got News for You and The One Show), an acclaimed interviewer (principally for the Sunday Telegraph), a novelist, children's author and biographer, his best-selling diary, Breaking the Code, was described as 'By far the best political diary of recent years, far more perceptive and revealing than Alan Clark's' (The Times) and 'Searingly honest, wildly indiscreet, and incredibly funny' (Daily Mail). He is the author of two acclaimed royal biographies: Philip & Elizabeth: Portrait of a Marriage and Charles & Camilla: Portrait of a Love Affair and published his own diaries in 2009.
The latest addition to his speaking portfolio are three keynote speeches:
Breaking The Code: How Government REALLY works
The 7 Secrets of Happiness
The 6 Essentials of Success
Gyles Brandreth's forebears include George R Sims (the highest-paid journalist of his day, who wrote the ballad Christmas Day in the Workhouse) and Jeremiah Brandreth (the last man in England to be beheaded for treason). His great-great-grandfather, Benjamin Brandreth, promoted 'Brandreth's Pills' (a medicine that cured everything!) and was a pioneer of modern advertising and a New York state senator. Today, Gyles Brandreth has family living in New York, Maryland, South Carolina and California. He has been London correspondent for Up to the Minute on CBS News and his books published in the United States include the New York Times best-seller, The Joy of Lex and Philip & Elizabeth: Portrait of a Royal Marriage.

"A huge thank you for your hard work and brilliant hosting at the Private Equity Awards last week.... Thank you so much for your professionalism, for mixing with guests throughout the whole evening and for being so polite, encouraging and enthusiastic. Thank you too for showing such interest in what we do, for all the effort put in to find out about the firms shortlisted and for adding so much value to the ceremony. Everyone I have spoken to was hugely impressed and made a point of saying how much they enjoyed your hosting."  Private Equity Awards - April 2017

‘A standing ovation on a wet Wednesday in January – amazing.  It was the best speech I have ever heard.’  Citywire New Model Adviser Awards - 2017

‘A standing ovation at the end of the best presentation I have ever heard . . . Pure genius and amazing research.’  Close Brothers Asset Finance Conference - 2017

‘This is the third year he has done it and it was better than ever – beyond brilliant, completely perfect.’  The Oldie of the Year Awards - 2017

‘Stunningly brilliant.’  The COCOAS Awards at the Eden Project - 2017

"Thank you for such a stellar performance at the annual dinner last Thursday. The night was a huge success, in no small part due to the wonderful way that you knitted everything together with wit and humour, and then topped it off with a really thought provoking piece on Europe and how it will impact on people in general as well as Birmingham specifically."  Chief Executive, Greater Birmingham Chambers of Commerce - April 2016
"He was fantastic, probably one of the best speakers we had.  He was absolutely delightful to work with and was great at interacting with the guests.  He had everyone laughing from the start, I think people were genuinely blown away, so thank you for suggesting him."  Denplan National Conference - September 2015
"Gyles Brandreth stood without notes and delivered what can only be described as the funniest and most entertaining after dinner speech that we had ever heard, setting the perfect tone and celebratory mood to ensure that everyone present had a wonderful time. Gyles ended the evening on a serious note, and with a standing ovation, he had made everyone present feel part of a huge success story."  Belvoir Lettings Awards, 2012
"Wow, what a pro! Gyles did a really great job ... he was a great host, very funny and couldn't have been more suited to the audience. He obviously works very hard and puts a lot of effort into these events. We would definitely use him again."   Gyles hosted the British Accountancy Awards - November 2011
"From the moment we made contact with Gyles he was enthusiastic, engaged, interested and courteous in all matters. He clearly had taken time to see who we were and what we did and that made all the difference to how the lunch played out."    Gyles Brandreth gave the after lunch speech at the PLASA AGM - June 2011
Thank you for your excellent contribution at our Lighting Industry event in Stratford upon Avon. The feedback has been better than any of us could have hoped and the audience's appreciation of your speech has been unanimous. Quite how you retain so much information about an industry you must surely know little about and then weave it into such an amusing speech, I have no idea. What impressed me, and the rest of the audience, was the way in which you read the tone of the evening so well.   CEO of The Lighting Association - July 2010

Author and One Show contributor, not to mention former MP, actor and all round polymath. A hugely popular choice for corporate events such as after dinner speaking, awards hosting and more. Particularly good for international audiences.