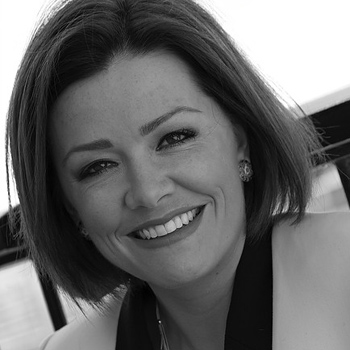 Hannah Vaughan Jones anchors news at CNN in London, predominantly presenting CNN Newsroom at 9am and 12pm UK and presenting business, bespoke current affairs and breaking news programmes across CNN. Hannah has previously anchored Sky World News through the week, and also across Sky's daytime output, including co-presenting with Eamonn Holmes on Sunrise.

During her six years at Sky she covered some of the biggest breaking news stories to define the 21st century. From the Japanese tsunami and the Arab Spring of 2011, to the hunt for missing April Jones in Machynlleth and the Boston Marathon bombings of 2013.

Behind the camera, Hannah has been a senior producer, chief sub writer and acting executive producer across Sky News at Ten, Afternoon Live and Live at Five.

Her aim is always to bring enthusiasm and insight to her presentations, whether on stage for a speaking engagement or when hosting/moderating an event. Hannah loves the thrill of a new challenge and has a wealth of experience as a professional broadcaster and corporate host. A perfectionist, with an eye for detail yet flexible enough to handle a last minute change of plan, Hannah thrives on the thrill of expecting the unexpected. She can be trusted to understand the brief and deliver the content and tone required to the highest level.

As a West Country girl, Hannah's broadcast career began in her home city reporting for BBC Bristol, before she embarked on an eye-opening year at Russia Today (RT) in Moscow. Hannah returned to the UK in 2006 as a producer for Associated Press Television News (APTN) in London.