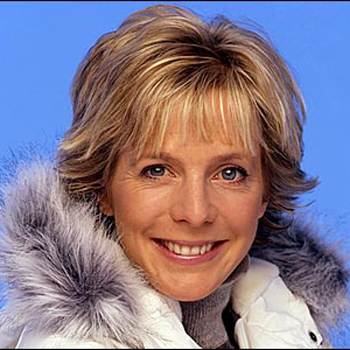 One of Britain's foremost and highly regarded television presenters and sports broadcasters, Hazel is renowned for her experience and versatility.
A key member of the BBC's sports broadcasting team at the London 2012 Olympics and Rio 2016, she also helped wake up the nation on the BBC's Olympic Breakfast programme from Beijing in 2008 and commentated on both Olympic's Opening and Closing Ceremonies.
An authoritative and engaging anchor, she is the regular face' of BBC Sport's coverage of snooker and athletics as well as golf and major multi-sport events. In 2007 she earned the Royal Television Society's Sports Presenter of the Year award and was the youngest presenter to anchor Grandstand and was the face of Ski Sunday for a decade.
Her credits also include the Commonwealth Games, The Ryder Cup, The Masters, Wimbledon, the London Marathon and the Boat Race. In football she has reported from four World Cups and European championships.
For BBC News she has been a regular on the Six O'clock and Ten O'clock news, she covered the Olympic Torch Relay, New Year LIVE and the 2012 Olympic bid announcement in Singapore.
Away from sport she has presented the 60th anniversary of the D-Day landings in 2004, VE Day celebrations and the Edinburgh Military Tattoo and she has hosted BBC Scotland's Children in Need appeal for 10 years and anchored its Millennium Night coverage.
An experienced conference facilitator and awards host, Hazel has worked for organisations such as the Diageo, Audi, RBS, Financial Times, UK Sport, London 2012, Department of Culture, Media and Sport.
Hazel has compered numerous awards ceremonies and is also in demand as an after-dinner speaker.
The evening was a great success - mainly because you got the best out of the guests¦¦you somehow get gently under the skin and get us to the real person versus the external celebrity persona. Pleasure to watch and experience. I know our Customers are blown away by it.  Interviewed Olympians at London 2012 for CISCO
"There were too many highlights to list them all, but I thought Hazel Irvine was outstanding in compering and linking the sessions - more than this, she has an empathy with sport and those involved and her links were as valid as many of the Keynote speeches. She was professionalism personified, with incredible insight."  UK Sport, World Class Performance Conference
Hazel Irvine lit up the Sunningdale golf club annual dinner as the 1st Lady speaker in over 100 years. Hazel galloped through a career littered with stories and interviews that had her audience enthralled. Hazel joined in the fun of the evening and made everyone feel at ease; she was a delight and I hope she is able to visit us again soon.  Sunningdale Captain 2012
Read More