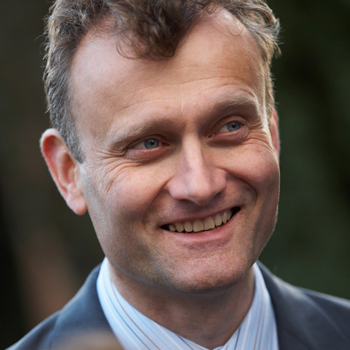 Hugh Dennis is a comedian, writer, actor, impressionist and voice-over artist, best known for his work with comedy partner Steve Punt and for the comedy series 'Outnumbered' and 'Mock the Week'. He is also a talented and captivating after dinner speaker and awards host.
Hugh Dennis, whose father was the Bishop of Saint Edmundsbury and Ipswich, grew up in Mill Hill in North London. He was educated at University College School, an independent school for boys in Hampstead, and at St John's College, Cambridge, where he read geography. He was a member of the Cambridge Footlights, but after university worked for Unilever for six years. However, with Steve Punt, whom he met at university, he carried on with comedy, appearing at London's Comedy Store. As mentioned on an episode of  'Have I Got News For You' he attended University College school with Will Self where they played rugby together.
A skilled impressionist, Dennis did voices for Spitting Image and appeared with Punt as resident support comics on two TV series hosted on the BBC by Jasper Carrott.
The pair then formed half of 'The Mary Whitehouse Experience' on BBC Radio 1, later graduating to a television series. His radio work with Punt includes over a decade of performing Punt and Dennis, It's Been a Bad Week and The Now Show as well as writing The Party Line (a topical political satire written and performed the day prior to transmission). On The Now Show he headlines with Punt, Mitch Benn, Laura Shavin, Jon Holmes and Marcus Brigstocke.
Since August 2007 Dennis has starred in the hit BBC comedy 'Outnumbered,' a semi-improvised sitcom based around family life which has won numerous awards.
Hugh has been a guest on panel shows from QI to Would I Lie to You? and has gone on to a host of both comic and serious acting roles from New Tricks to Agatha Christie’s Marple, Not Going Out to Doctors, Midsomer Murders to the acclaimed Fleabag.
"Our Conference was a great success and Hugh Dennis was, by far, our most popular after dinner speaker/entertainment yet!"  Hugh was the after dinner speaker at the Tax Assist Annual Conference
"Hugh was terrific on Friday...Please pass on to him our grateful thanks for entertaining everyone so well, in spite of a cold. I heard nothing but very positive feedback from our guests."  Music Publisher's Association

"Absolutely brilliant! We want him for next year."  PSE on Hugh Dennis who hosted the Green Fleet Awards

"First class - the material was spot on, and combined industry references with topical comedy."
Hugh and Steve spoke at the ABI Financial Media Awards

Popular comedian and actor best known for Mock the Week, Outnumbered and as one half of Punt & Dennis.