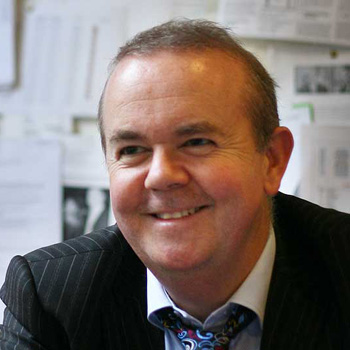 Ian Hislop is editor of Private Eye, though he is better known to millions of fans as team captain in nearly forty series of Have I Got News For You. The show has won several awards including a BAFTA for Best Light Entertainment; in his own right, Ian has received the highest award from the British Society of Magazine Editors.
Aside from HIGNFY, Ian frequently appears on TV and radio as both commentator and presenter. His long list of credits ranges from Question Time and the grown-up version of University Challenge to documentaries on the scout movement, the history of tax and the popularity of the nation's railways. He has also explored his family roots in Who Do You Think You Are?
Ian originally penned sketches for Spitting Image and Harry Enfield, before turning his hand to screenplays for the likes of Dawn French and Maureen Lipman. He was also co-writer of the BBC sitcom, My Dad's The Prime Minister.
In his after dinner speech, the most sued man in Britain talks about the joys of litigation. He might also mention his ill-fated attempts to drive overseas sales of Private Eye - an object lesson in how not to conquer the export trade. Ian's novelist wife Victoria has enjoyed rather more success in foreign climes.
Read More