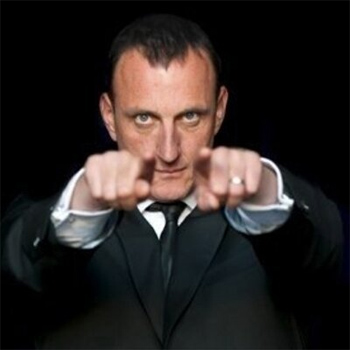 Arguably the UK's leading warm-up man, Ian has been with both The X Factor and Britain's Got Talent since the very beginning, working on all of Simon Cowell's shows on both sides of the Atlantic.
Ian has over 300 hours of live television presenting to his name including 'The Big Big Talent Show', 'Talking Telephone Numbers', 'The Time The Place', 'Stand and Deliver', 'The Stand up Show' and 'The London Debate' and The Xtra Factor
He has warmed up audiences for 'The X Factor', 'Britain's Got Talent', 'Friday Night with Jonathon Ross', 'Parkinson', 'Dancing On Ice', 'Family Fortunes', 'American Idol', 'America's Got Talent', 'Ant and Dec's Saturday Night Takeaway', 'You've Been Framed', 'This is Your Life', 'Piers Morgan's Life Stories', 'Armstrong and Miller' and 'Children In Need at the Royal Albert Hall' and The Royal Variety Performance.
Ian thrives on improvisation, and his ability to think on his feet and push people to their limits without insulting or upsetting them is nothing less than unique..
On radio 'Talk Sport' he has covered for every presenter including James Whale, Ian Collins and Charlie Wolf.
Ian starred in the hugely successful hit West End show 'Boogie Nights' at the Savoy Theatre, playing second lead to Shane Ritchie. He has also appeared in four pantomimes
Ian has been performing stand up for 22 years and has had people laughing from the troops in Bosnia, Kuwait, Oman, Iraq, Afghanistan Northern Island and Kabul, to over a thousand sailors aboard two aircraft carriers!
For corporate events Ian specialises in tailoring his act into award ceremonies, auctions and specialist company functions. He has entertained for BMW, Barclays Bank, NSPCC, The Kelly Group, P&M, Microsoft, Price Waterhouse, The Mirror Group, Cancer Research, Dixon's, Lincoln Financial, Mr Kipling, Virgin, Carlson Wagonlit, Green Flag, British Airways to name but a few and not only in the UK but  across Europe, America, Canada and Australia.
Ian has over 300 hours of live television presenting experience. 2012 has seen Ian returning to television  on ITV's "This Morning" and Sky News for the paper review as well as his regular work on the X Factor.
Read More