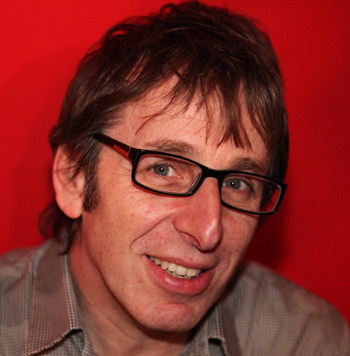 Ranked among the top ten stand ups in Britain by The Independent, Ian Stone is one of the most talented and entertaining comperes in the country. Edgy and provocative, with an easy-going manner and self-deprecating style, Ian is at ease bantering with an audience.
He is also a member of the Comedy Store's Cutting Edge team and a regular on radio, hosting and presenting his own shows and taking part in panels. He currently co-hosts Rock 'n' Roll Football on Absolute Radio with Ian Wright. They presented the show almost daily throughout Euro 2012 and won a Sony Silver Award.  He has also hosted his own weekly TV show 'Off the Ball' on ESPN.
In 2010 he presented Christmas Up Front, a documentary about performing for troops in Afghanistan, on Radio 5 Live. he has been a regular guest on Gabby Logan's programme and on the sports panel show Fighting Talk. In 2010 he was one of The Armchair World Cup team and has been a regular on Alan Davies' football shows.
He helped found the Arsenal-fan orientated podcast, now known as the Tuesday Club, and is a regular columnist in the official Arsenal magazine.
On TV Ian has appeared on Mock The Week, The World stands Up, Live at The Comedy Store, Never Mind the Buzzcocks, The Stand Up Show, Saturday Live and the 11 O'Clock Show. He has also featured on Most Annoying People and is in great demand as a writer, having written for Russell Howard's Good News and Alistair McGowan's You Cannot Be Serious.
In high demand for corporate events, Ian has delighted audiences large and small, across the board. Incredibly versatile, he is adept at delivering a quality performance across the spectrum of clientele.
Read More