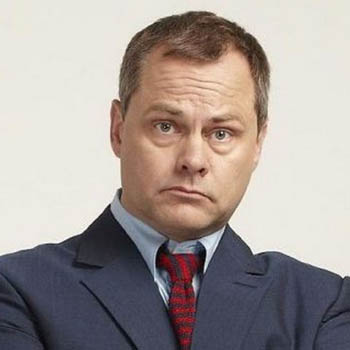 Since The Jack Dee Show hit the small screen in February 1992, Jack Dee has become a household name.

Born in Petts Wood and brought up in a family with a history of musical entertainers and mental illness, he left a Winchester comprehensive to start a career in catering. Realising his dour persona got more laughs than respect in the restaurant business, he followed up the advice of numerous colleagues and customers and took to the boards. That was in 1988 and Jack Dee has not looked back since.

Jack's TV career has gone from strength to strength. By 1995, he was staring in his own series on ITV. Since then, he has rarely been away from our screens with Christmas specials; Jack and Jeremy Police 4 with Jeremy Hardy (Ch 4); Glamorama (a 70's pop quiz) and Jack and Jeremy's Real Lives. He also appeared in Granada Television's comedy drama, The Grimleys; Jack Dee's Sunday Service, It's Only TV But I Like It (BBC1); Jack Dee's Full Mountie (BBC1) and Jack Dee's Happy Hour.

In 1991, Jack appeared in drama in The Ambassador and Silent Witness.  In 1998 he performed in a West End play for the first time, as Yvan in 'Art'. The director Matthew Warchus was so impressed with Jack's performance that he asked him back to play Serge for a 13 week run.
More recently he wrote and starred in the sitcom Lead Balloon, four series of which aired on the BBC - the last series in 2011.
Read More