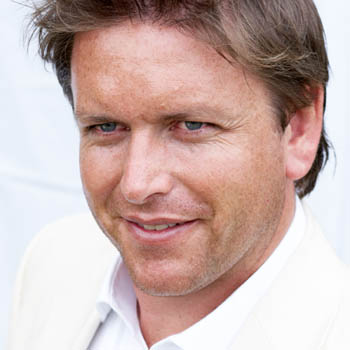 Immensely popular chef from Yorkshire who made a name for himself at Antony Worrall Thompson's 190 Queensgate (AWT had already spotted his talent at catering college in Scarborough). At the tender age of 22 he was head Chef at the Hotel and Bistro du Vin in Winchester, offering his signature style food - Modern British with a hint of Mediterranean.

With wide-ranging experience cooking in the chateaux of France, often side by side the mothers and grandmothers of the properties, James combines elegance with glamour. Rarely off the television screen on various cooking and travel programmes.

James was a regular member of the Ready Steady Cook team and entranced Saturday night audiences as one of the celebrities taking part in Strictly Come Dancing on BBC1, eventually reaching the semi-finals.

Martin appeared alongside Angela Hartnett and Richard Corrigan on BBC1 on a special edition of The Great British Menu entitled The Great British Budget Menu. The show aimed to highlight food poverty and involved the chefs cooking nutritious meals on a budget.

James Martin's Food Map of Britain aired on BBC2. There were 10 episodes with each focusing on a different region of Britain. James investigated the produce of each area and cooked two dishes per episode.

Based at his kitchen at home in Hampshire, he presented the series James Martin: Home Comforts on BBC 1. Many of the dishes were inspired by memories of his childhood in Yorkshire, and the programme also featured many local small-scale food producers and cooks.

James presented BBC 1's Saturday Kitchen for many years and then went on to present James Martin's Saturday Morning  which is a lifestyle show on ITV that he is currently presenting.

"He went down extremely well with all the venues, secured substantial media coverage and my client, the LSC North East, was very pleased with the way he got their message across and how he entered in to the fun, but at the same time serious theme, of the challenges."  Recognition PR on James Martin who took part in a media day for the Learning and Skills Council in the North East