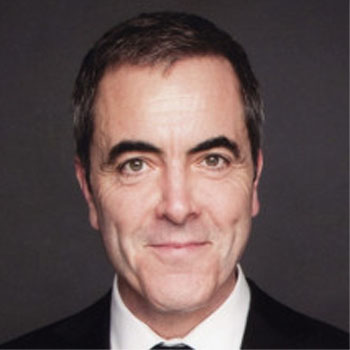 James studied at the Central School of Speech and Drama in London having originally planned to read French in Uster. A day after graduating from drama school, he landed a part in Virtuoso a BBC2 film on the life of the composer John Ogdon. His theatre career developed with roles in Up On The Roof, Hamlet and As You Like It.
In 1991, he secured a supporting role in his first film  Peter Chelsom's comedy Hear My Song, about the tenor Joseph Locke. A series of TV and movie appearances followed, including roles in Michael Winterbottom's films Love Lies Bleeding, Jude and Welcome to Sarajevo. In 1994, Nesbitt married Sonia Forbes-Adam who he met five years earlier while performing in Hamlet.
Undoubtedly James Nesbitt's big breakthrough came with the romantic lead in the hit ITV comedy drama series Cold Feet opposite Helen Baxendale, John Thomson and Fay Ripley. The series ran from 1998 to 2003 and was garlanded with awards including the Golden Rose at the Montreux Television Festival and a Best TV Comedy Actor award for James at the British Comedy Awards. He further raised his international profile by appearing in the hit comedy movie Waking Ned alongside David Kelly and Ian Bannen.
In 2002, James Nesbitt shifted gear with a widely praised lead performance as Ivan Cooper in Paul Greengrass's Bloody Sunday. He was nominated for a BAFTA and secured a Best Actor award at the Stockholm International Film Festival. The role paved the way for other edgier roles in the ITV docudrama Wall of Silence, the BBC series Jekyll and as the undercover police officer Tommy Murphy in the Colin Bateman-penned BBC series Murphy's Law. James has continued to take on a wide and varied range of comic and dramatic roles appearing in comedies like Danny Boyle's Millions and Woody Allen's Match Point and in darker material like the Iraq-themed drama Occupation and the post-Troubles drama Five Minutes of Heaven with Liam Neeson.
In 2003 he received the honorary degree of Doctor of Letters (D Litt) from the University in recognition for Services to Drama.
His movie roles have included Ralph Fiennes' adaptation of Shakespeare's Coriolanus where he starred opposite Vanessa Redgrave, Gerard Butler and Brian Cox and also in Emilio Estevez's drama The Way, starring alongside Martin Sheen.
He starred as Bofur the dwarf in Peter Jackson's The Hobbit: An Unexpected Journey, the first of a trilogy of films and he's also in the TV medical drama, Monroe.
James lends his name to a number of deserving causes including being a patron of Action Cancer, a patron of the Troubles victims' organisation, Wave and an ambassador for UNICEF. In June 2010 he became Chancellor of the University of Ulster.
Read More