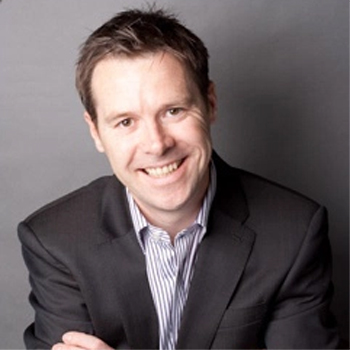 An after dinner speaker with a background in banking, whose entertaining after dinner tales of the financial collapse from the front line have proved a hit with corporate audiences.
James Sutherland is a former financial advisor and bank manager who brings his own style of humour and originality to his after dinner speeches.
After spending 14 years in High Street banking with Abbey/Santander, James decided to convert insider knowledge of the often quirky world of finance and break into comedy.
Whilst most people sat back and watched the news on TV as the banking sector went into meltdown, James was on the frontline, and consequently gives his audiences an insight (and his own take) into what was really going on behind the scenes.
His stories of starting his professional life on the counter of a busy bank, through to taking those first steps onto the stage, leaves audiences both gasping in disbelief and roaring with laughter.
Entering the world of comedy and after dinner speaking was a bold career move for James, but after being part of the establishment and the banking industry, and dealing with some of the fallout from the credit crunch,  he reckoned anything would be possible.
Giving presentations at business conferences and at meetings while he was at the bank allowed James to develop his talents and skills as an after dinner speaker and meetings gave him the opportunity to try out some of his routines.
Read More