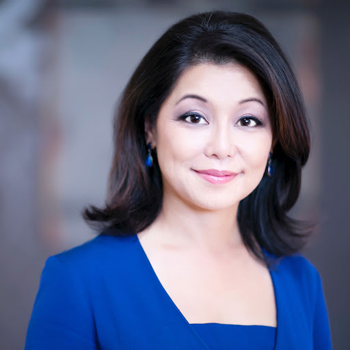 Janet Wu is a multi-media journalist known for her many years as an anchor and health reporter for Boston's NBC station. She currently contributes medical reports to two networks and is an adjunct professor at Emerson College.

A frequent contributor to The Boston Globe, her journalistic work has also been published in The New York Times, The Boston Herald and in several anthologies, including The "Norton Sampler of Essays," one of the most widely read college textbooks.

She graduated from Yale with a dual major in Philosophy and Psychology and earned a master's degree in Journalism and International Affairs at Columbia University.

Janet is on the Boston Board of the American Heart Association, in honour of her late father who was a noted heart surgeon. She also sits on the Boards of Overseers for the New England Conservatory of Music and The Franciscan Hospital for Children. She on the Advisory Boards of The Max Warburg Foundation and Homestart and is a Founding Member of SheGives, a venture philanthropy organisation of women.

She was named The Girls Scouts of New England 2015, Leading Woman of the Year and was on the Fall 2016 slate of TEDXCambridge speakers.

American-based Janet is also a talented musician who plays the piano and cello and has traveled to 64 countries.