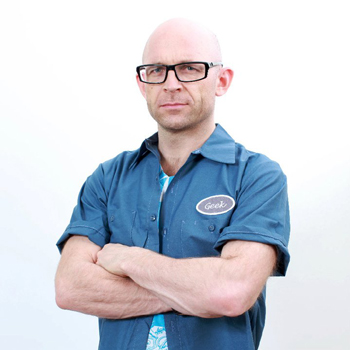 Best known as Channel 5's Gadget Show host, alongside Suzi Perry, Jason Bradbury is a force of nature when it comes to his passion for gadgets and science.
His inventions have become legendary with Gadget Show viewers - his in-car heads-up display, a mind-controlled computer interface and the world's first working jet-powered hoverboard,  to name a few.
But television presenter and children's author Jason's roots lie in the stand-up comedy circuit where he started out in a double act with David Walliams of Little Britain fame.  He has also chalked up a number of light- entertainment credits on Trouble TV, Bravo TV,  Sky 1, Channel 4 and  LWT.  But it is in the arena of Science and Technology that he can most readily fuse his personal passion for science with the skills of an entertainer.
The gadget and technology maestro is also keen collector of 'exotic' gizmos as well as being an ardent techno DIY-er.  Jason is a qualified pilot and has showcased his flying skills on many TV shows including BBC's 'Top Gear of the Skies', 'The Air Show' and Channel 4's award winning schools series 'Science In Focus'.
His first children's book, the techno-thriller 'Dot Robot' was published by Puffin in 2009, followed by 'Atomic Swarm' in 2010 and 'Cyber Gold' in 2011.
Jason is on the judging panels for the BAFTA Video Game Awards and the Media Guardian Innovation Awards.
Read More