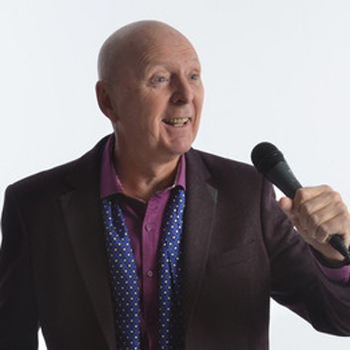 Jasper Carrott was born in Birmingham in 1945, and educated at Acocks Green Infants/Junior School and Moseley Grammar School.

His first performance of note was as resident compére at the Boggery Folk Club in Solihull. There he discovered his talent for comedy, and his inability to sing, and the rest, as they say, is history.

In 1975 Jasper released his first single. Funky Moped / Magic Roundabout, was a massive chart hit, selling almost a million copies and narrowly missing a Gold Disc. Jasper's first television appearance was in The Golden Game for BBC Midlands, in 1975.

His first television series was aired in 1978, 'An Audience with Jasper Carrott'  for LWT, a series of six shows.

In 1979 Jasper was named as ITV Personality of the Year. In 1982, Jasper conceived and co-wrote the live series "Carrott's Lib", which won a BAFTA Award.

In 1992 he teamed up with Robert Powell for 'The Detectives', a comedy series about two bungling detectives. Such was the success of the initial series there were four further series plus a 1997 Christmas Special.

During the 80s and 90s Jasper regularly presented a Christmas Special for the BBC, either in the form of the hugely successful "Carrott's Commercial Breakdown", with over 14 million viewers, which won the Best Independent Prize at the prestigious Montreux Festival and Gold at the New York TV & Film Awards, or as a television special like "One Jasper Carrott".

In 1995 Jasper celebrated his 50th birthday and was presented with the "Midlander of the Year" award, a prestigious honour which he now shares with such diverse characters as Betty Boothroyd and Ozzy Osbourne. His live TV show 'The Unrecorded Jasper Carrott' was a unique live to air one hour comedy show and also in 1995 Aston University presented him with an Achievement Award for Services to the Midlands.

1996 and 1997 saw Jasper return to writing for a new series for the BBC and a major UK tour. The tour embraced over 150 sell out shows, including a sell-out 14 night run in the Birmingham Hippodrome.

1998 culminated with filming Back to the Front, a series for the BBC, which Bob Monkhouse called "the finest stand-up comedy on television".
In 2002, Jasper starred in All About Me - a sit-com made by Celador Productions for the BBC. A second series followed in 2003 and a third in 2004, the year he became a Savoyan when D'Oyly Carte invited him to appear as Koko in their production of The Mikado at London's Savoy Theatre.

In 2003 Jasper Carrott was awarded an OBE in recognition of his outstanding work for charity.

He returned to his Birmingham roots in 2004 with a record-breaking season of shows at Birmingham's National Indoor Arena. Such was the public response, the season was extended to fourteen nights, selling over 70,000 tickets and breaking box office records. It was also the longest run for a comedian performing on consecutive nights in an arena.  24 Carrott Gold was filmed and broadcast in six parts on BBC1.

In July 2004, Birmingham University presented Jasper Carrott with a Doctorate for Business Studies.

Jasper Carrott's Rock with Laughter variety show plays to four sold out nights at the NEC, attracting over 40,000 people in 2005. It ran there again, equally successfully, in 2006 and 2007.
Read More