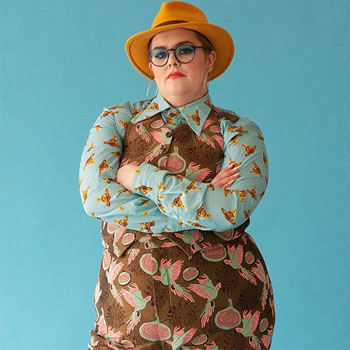 Jayde Adams is an Award-winning comedian, actress and proud Bristolian!

She has been nominated for Best Newcomer at the Edinburgh Comedy Festival and made the BBC New Talent Hotlist.

She has also appeared on our screens as a guest on Roast Battle, Live At The Comedy Store, The Chris Ramsey Show (Comedy Central), 8 Out of 10 Cats Does Countdown (Channel 4), 8 Out of 10 Cats (E4), Dara O’Briain’s Go 8 Bit (Dave) and Russell Brand’s Stand Off for Comic Relief (BBC).

Recently Jayde has appeared in Amazon Prime’s Good Omens (BBC) has been host of Netflix’s Crazy Delicious and has co-hosted with Fred Siriex on Channel 4’s BAFTA nominated show Snackmasters.

2021 is an exciting year for Jayde who stars in her first major role in a BBC 2 series written by Sophie Willan; Alma’s Not Normal.

Jayde also wrote and starred in Bloody Tracy, her own Sky Halloween Comedy Short, with Guilty Party Pictures and starred in her own BBC 3 Top Ten short Affordable Meats, produced by Me & You Productions (Emmy-award winning producers of Hoff The Record).

As a live Act, Jayde is in-demand having performed the main comedy arena at Latitude and MC’s regularly for Knock2Bag and BBC Studios, as well as co-hosting the popular monthly night Amusical with Kiri Pritchard Maclean and Dave Cribbs. She is also the face of Sun Bingo as seen in the popular adverts directed by Jack Clough, who most recently directed the BAFTA-winning comedy series People Just Do Nothing – with the catchphrase #AreYouGonnaBingo.

It’s hard to believe that she started out life as a fishmonger in Asda, and had no idea that she was any good at anything.

A great after dinner corporate choice!