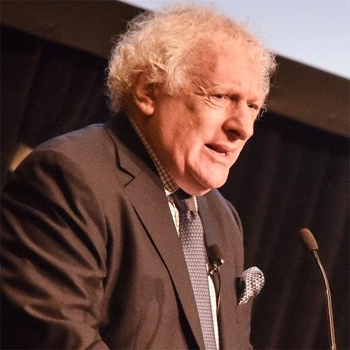 Jeffrey Robinson is the international best-selling American author of 20 books, a frequent guest on television and radio talk shows on both sides of the Atlantic, and the 1990 winner of the Benedictine After-Dinner Speaker of the Year Award.

A native New Yorker, and with more than 600 published credits to his name Jeffrey moved to England in 1982 to concentrate on writing books. In 'The Risk Takers', his first UK best-seller, Robinson portrayed the high-flyers of the City and recounted their tales of money, ego and power. He followed that with the off-beat sequel, 'The Minus Millionaires', in which he told stories about "risk takers" who'd lost fortunes.

Robinson's international reputation was greatly enhanced by his investigative tour de force, 'The Laundrymen - Inside The World's Third Largest Business'. In it, he uncovered the true extent of global money laundering and showed how hundreds of billions of dirty dollars are derived mainly from the drug trade, then reinvested throughout the world by otherwise legitimate businessmen, lawyers, accountants and bankers. The book, heralded by Business Week as, "An indictment of governments and banks," was a headline-maker in 14 countries around the world and the subject of two major television shows, both hosted by Robinson.

His expertise on worldwide fraud and money laundering has made him a much sort after commentator by the media. Some of the issues he discusses include the effect of the Single European Currency, and the threat of money laundering to finance terrorist activity such as the September 11 atrocities.

His next work was 'Prescription Games', an investigative study in the mould of The Laundrymen and The Merger, which looked in-depth at one of the most politically powerful industries on the planet -Pharmaceuticals.

Drawing on material from his books, the research that has gone into them, his unique access to the inner-workings of international business - both legal and criminal- and what he calls "the new business mentality," makes Jeffrey Robinson a dynamic, charismatic, amusing and uniquely effective speaker
A frequent guest on television and radio on both sides of the Atlantic, Jeffrey's appearances over the past several years have included NBC News, ABC News, Good Morning America, CNN, Fox News, BBC Breakfast, BBC Newsnight, ITN Evening News, the ITN News Channel, Channel 4 News, CBC, CNBC, MSNBC, Sky News, BBC World, Bloomberg, NBC's Today Show and Larry King Live.
Jeffrey lives in New York and London, and is fluent in French and English.
Read More