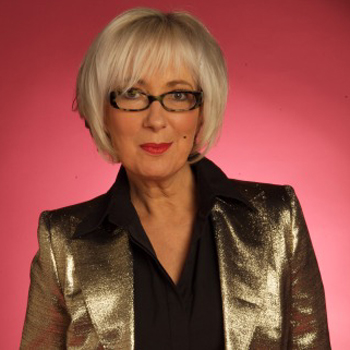 Jenny Eclair has been a stand up comic for donkey's years. She was the first woman to win the coveted Perrier Award and hasn't stopped banging on about it ever since. She is currently on tour around the UK with her brand new live stand-up show Old Dog New Tricks, and has just published 'Chin Up, Britain' a book for right-minded men and women who are fed up with shilly-shallying.

She's featured on TV in the 'Grumpy Old Women' series, plus the 'Grumpy Guides', 'Grumpy Holidays' and 'It's Grim Up North'. She also occasionally appears on day time TV on 'This Morning' and 'Loose Women'.

She originally trained as a straight actress and has appeared on 'Holby City', 'The Bill' and 'Skins'. In early 2009 she cropped up playing women of forty plus, in Al Murray's Multiple Personality Disorder (ITV1).

Other West End theatre credits include 'Steaming', 'Mum's the Word' and 'The Vagina Monologues'. Most recently she appeared in the title role of 'The Killing of Sister George' for the Derby Playhouse, unfortunately she spent the entire time she was on stage looking like a fat Margaret Thatcher.

Jenny is a writer as much as a performer and has co-written (with Julie Balloo) a number of one-woman plays including the critically acclaimed 'Andy Warhol Syndrome', which was also adapted for BBC Radio 4.

She is the author of two novels 'Camberwell Beauty' and 'Having a Lovely Time', whilst her non fiction books include, 'The Book of Bad Behaviour', plus 'Grumpy Old Couples' and 'Wendy The Bumper Book of Fun for Women of a Certain Age' (both of which were co-written with Judith Holder). Radio writing credits include two series of Twilight Baby for Women's Hour on BBC Radio 4.