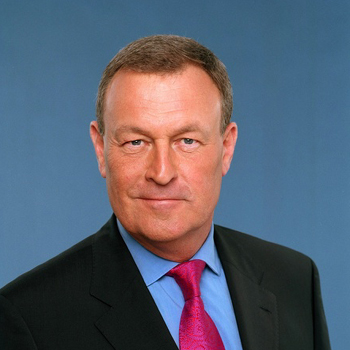 One of Britain's most experienced television newsmen, Jeremy Thompson has been a correspondent for Sky News, the BBC and ITN, covering major news events. He has reported from nearly 100 countries and has run foreign news bureaux in Asia, Africa and the USA.
Among the awards he has received are an Emmy from the US Academy of TV Arts and Sciences, three Gold Medals for Best News Reporter from the New York TV Festival, and the Royal Television Society award for Sky's coverage of the Kosovo conflict.
He was named RTS Presenter of the Year in 2006.
As a foreign correspondent, Jeremy has covered over a dozen wars and civil conflicts. In 1999, he was the first TV newsman to broadcast live as British peacekeeping forces rolled into Kosovo. In 2003, Jeremy anchored Sky News' coverage of the second Gulf War from Iraq, and was the first anchor to present from inside Baghdad. Since moving back to London in 1998, Jeremy has been involved in many of Sky News' biggest live news events including the Liberation of Kosovo in 1999, the terrorist attacks of 9/11, the Soham murders, the second Gulf War in 2003, the Madrid Train Bombing, the Indian Ocean Tsunami, the Israel Lebanon Conflict and the death of Pope John Paul II. In 2007 Jeremy anchored live coverage from Praia de Luz in the days following the disappearance of Madeleine McCann.  He also reported from Kingston, Jamaica on the death of Pakistan cricket coach Bob Woolmer, whom he knew personally. In 2008 Jeremy covered the Beijing Olympics and followed Obama's historic election. He covered Obama's inauguration in January 2009 and anchored coverage of Sky News' historic leaders' debate in Bristol. Jeremy reported live from Downing Street as Gordon Brown announced his resignation in 2010, presented from California during the US Mid-Terms, and was part of the International Emmy Award-winning team for Sky News' special programme, Pakistan: Terror's Frontline. In 2011, Jeremy reported from Pakistan following the death of Osama bin Laden, presented live on the ground in Tripoli during the uprisings in Libya, and was one of the few journalists given permission by the Syrian Government to report from Damascus.
Read More