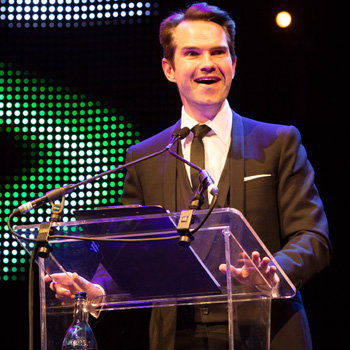 Jimmy has been a fixture on our screens, and the UK comedy scene for over a decade.

On TV, he continues to present 8 Out of 10 Cats, the comedy panel show based on polls, surveys and statistics for Channel 4. Other recent television appearances include The Graham Norton Show, Have I Got News for You, Would I Lie to You? and QI.

While a household name in the UK,  his profile in the USA continues to grow. Jimmy has performed a second Comedy Central Special and also appeared on NBC's Late Night with Conan O'Brien!. Jimmy's game show Distraction aired on Comedy Central and was subsequently repeated. He has also appeared many times on NBC's flagship programme The Tonight Show with Jay Leno. Across the border in Canada Jimmy also performed at the Montreal Just for Laughs Comedy Festival for many consecutive years.

Currently he can be seen in "The" Fix on Netflix which started in December 2018. Jimmy hosts the all-new US panel show, which sees a rotating panel of comedians who will attempt to solve the world’s problems, once and for all!

In the corporate market, Jimmy is popular either as an after dinner speaker or awards host. Clients are drawn from all sectors and have included Tesco,  Santander and numerous publishing companies to name but a few.

"...it all went swimmingly...He was hilarious!" WMC Communications on Jimmy Carr speaking at their office launch


I am pleased to report that we have received a great deal of positive feedback from guests at the Awards, congratulating us for what was indeed a spectacular all-round success, and especially for the calibre of presenter! One of our sponsors commented "Jimmy Carr was the best presenter I have ever seen"! Centaur Events on Jimmy Carr who hosted their Mortgage Strategy Awards
Read More