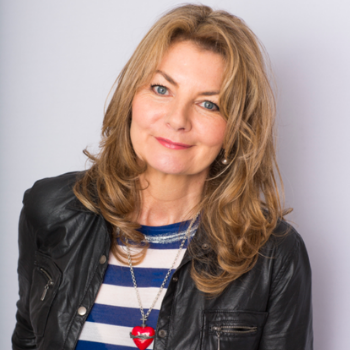 The minute Jo Caulfield hits the stage you know you're in for a good time seeing as she was recently nominated as 'Funniest Woman 2010' (LAFTA Awards), 'Best Female Stand-Up' (Chortle Awards).
Jo has appeared regularly on our screens with appearances on 'Have I Got News For You (BBC1), 'Mock The Week' (BBC2) 'Michael McIntyre's Comedy Roadshow' (BBC1), 'Saturday Night Live' (ITV), 'Argumental' (Dave UKTV), 'Comedy Store' (Paramount Comedy Channel), Colin Murphy's Great Unanswered Questions (BBC N. Ireland), The Wright Stuff (Ch 5), 'The Blame Game' (BBC N. Ireland),  It Takes Two (BBC 2), Bremner, Bird and Fortune- The Daily Wind-Up (Ch 4) and has also been seen on numerous 'Talking Head' shows due to her wide ranging knowledge of music, comedy and all popular culture.
And, let's not forget her stints as a guest presenter on 'The Politics Show' (BBC1) 'The ONE Show' (BBC1) and 'The World Rally: Portugal 2009' (Dave UKTV).
Writer and star of her own critically acclaimed Radio 4 comedy show 'It's That Jo Caulfield Again'. Jo was Programme Consultant on all 5 series of the BAFTA award-winning 'So Graham Norton' (Channel 4). She was Head Writer on Ruby Wax's ' The Waiting Game' A BBC 1 Game show.  Jo has also written for Joan Rivers, Anne Robinson and Denise Van Outen.
A trained actress, as well as acting in her own Radio show Jo has appeared in several sitcoms, including Life's A Pitch (BBC1), Days Like These (ITV), Beast (BBC1), and Get Real (ITV). She also played someone's sister in Family Affairs (Ch5) but can't remember her name. Other acting credits include: So Graham Norton (Ch4) and Stitch-Up (CBBC).
Jo is in regular demand as a host and after-dinner speaker at corporate events across the country. She has spoken at corporate dinners, business lunches, award ceremonies, charity events, St. Andrew's nights and many more.
She specialises in giving 'The Response on Behalf of The Lassies' at Burns Suppers.  Her Celtic qualifications for this are the fact that she was born in Wales to Irish parents and is married to a Scotsman.
'Many of the points Jo Caulfield makes about the human condition would have sociologists stroking their beards in admiration, but her audiences tend to be laughing too much to notice' The Times
'Jo Caulfield is incapable of doing a bad show, so sharp is her tongue and so in tandem is it with her mischievous mind' The Scotsman
'Jo Caulfield is an inspiration to all would-be female comedians' The Observer
Read More