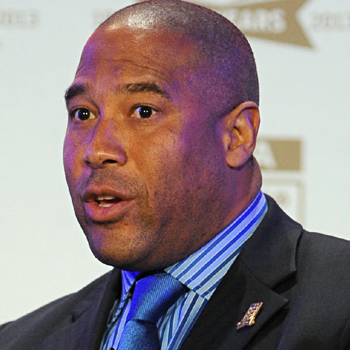 John Barnes has an exceptional record as a player on both international and domestic level. In 1981, he made his first team debut for Watford and as well as scoring 13 league goals he helped the team win promotion into the First Division. Whilst at Watford he also helped coach the football team at top Public School, Eton.

In 1983 he made his international debut, at the age of 19, when he came on as a substitute against Northern Ireland in Belfast. And in 1984, Barnes scored his first international goal, an unforgettable solo effort against Brazil, which ended by England winning 2-0. In 1986 Barnes enjoyed his first World Cup, in which he helped England reach the quarter-finals in Mexico.
In 1987, Barnes signed for Liverpool under the management of Kenny Dalglish and was crowned England's Player of the Year in 1988, an honour which was repeated two years later. 1990 was also the year in which Barnes helped England to the semi-finals of the World Cup in Italy. The last of his 79 England caps was against Colombia in 1996.
In 1997, he left Liverpool and again joined Kenny Dalglish, this time at Newcastle. Two years later he moved to Charlton at the tail end of the season, before becoming Celtic Head Coach in 1999.
His record includes - two English titles, two FA Cups, one League Cup, 79 caps and 11 goals for England.
After a bright start to season 99/00, a string of bad results, culminating in the defeat against Inverness Caledonian Thistle in the Scottish Cup, saw John's contract terminated in February 2000.
John makes frequent appearances on ITV Sport Network as a pundit.
"A great speech.... Very understanding of our requirements ... Popular with the blokes and ladies alike... Great value and great company."   British-Irish Airports Expo - June 2016

One of the first high profiles black footballers who made his name at Watford before moving to Liverpool in 1987. His international career with England started at the age of 19 and he went on to win 79 caps before retiring and becoming a TV pundit.