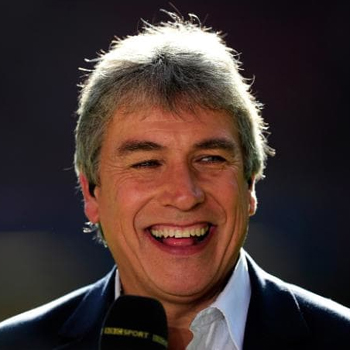 The son of a Royal Navy dental surgeon, John Inverdale was born in Plymouth in 1957.
He attended Clifton College in Bristol and went on to gain a degree in history at Southampton University before embarking on a career in journalism.
John spent two years on the Lincolnshire Echo and then joined BBC Radio Lincolnshire in 1982, where he covered local government and health authority meetings and presented the breakfast show as well as various sports programmes.
In 1985 he took up a trainee attachment on Radio 2 sport output and was offered a full-time position working alongside Ray Moore on the network's early shift. From 1988 to 1994, John worked for Radio 5 as the presenter of its flagship sports programme Sport On 5, before becoming one of the first presenters on the new Five Live. John has presented Five Live's coverage of many major sporting events including Wimbledon, the Olympic Games, World Cups (both football and rugby), the Ryder Cup and Euro 96. He previously anchored the network's drivetime show John Inverdale Nationwide for which he was named Sony Broadcaster of the Year in 1997.
John has also enjoyed an auspicious television career, presenting five series of BBC One's acclaimed sports chat show On Side. He also presented the investigative sports series On The Line and Rugby Special, both on BBC Two, as well as Grandstand, Sunday Grandstand and The World's Strongest Man for BBC One.
Married with two daughters, John's biggest sporting passion is rugby union, and he is closely involved with Esher RFC.  He is also a self-confessed pop trivia bore!

John has presented Five Live's coverage of many major sporting events including Wimbledon, the Olympic Games, World Cups (both football and rugby)and the Ryder Cup.