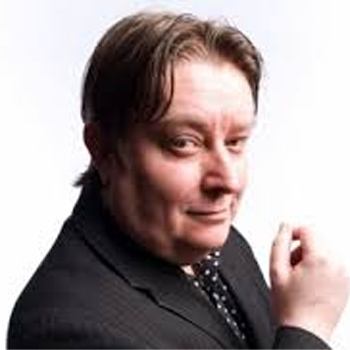 John Moloney has been a professional comedian for over twenty years, and has entertained audiences across the globe with his crafted, intelligent and original stand-up routines.

Winner of the Best Live Performer award for two years running at the London Comedy Festival, John has become one of Britain's most in-demand comedy acts, a true comic talent.

John was also delighted to be nominated as 'Best Live Stand-Up' at the British Comedy Awards.

2008 saw John performing at the Melbourne Comedy Festival. John was also invited back to the Melbourne Festival in 2009 and was the hit of The Sydney Cracker Festival in 2009.
John was a huge hit this year at the 2010 Edinburgh Fringe festival with his show Butterflies with Stretchmarks" thar received rave reviews.

He has been entertaining on the Corporate Circuit for more than ten years and has performed to more than 500 Corporate Clients.

John professionally tailors his material to each audience, and, upon request, writes material that is specific to the client.

"I was fortunate enough to attend a corporate event recently organised by a valued client of mine, and I was truly delighted with your performance.  As a fan of stand-up comedy, I have been to many comedy shows, but I have rarely seen a performer with your quick-fire comedic skills.  I think you pitched your performance to the room with precision.  You were the highlight of the evening. It's a welcome change to see such intelligent material delivered with gracious style and an unwavering depth of professionalism."
Sales manager, VYRE
A wondrous array of classy gags. Comedy scholars, plus folk needing a right good laugh, can choose from a wide range of quality Moloney originals. Take your pick from droll one-liners; coruscating bits of political satire, absurdist observations; gleeful schoolboy puns and observant re-interpretations of everyday phenomena. In addition, they're all delivered with a measured dryness and quiet understatement, too. Masterly.
The Herald

Moloney's comedy is in defiance of the trend towards sophistication. His technology consists of a microphone and¦.that's it. His gags are stripped down and rapid, his delivery is suitably clipped. No fat on this show.
The Sunday Times
Read More