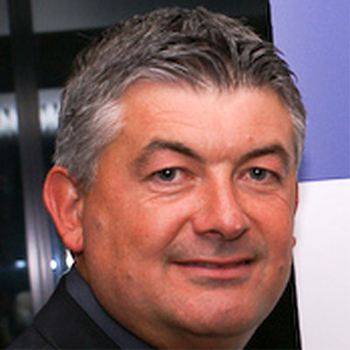 Competing in front of the camera comes as second nature to John as A Question of  Sport team captain when he battled it out with rival captain Ally McCoist from 1996, when they both joined the show.

John  presents snooker for the BBC alongside Hazel Irvine and Steve Davis, including the UK Championship, the Grand Prix, the World Championship and the Benson and Hedges Tournament.

Born in Liverpool in 1964, John's career in snooker started in 1982 when he won Junior Pot Black. After winning it again the next year, he turned professional. In 1991, he was winner of the World and UK Championships - only one of three players ever to do both in the same year.

He is now ranked 22nd in the world, has won 14 major titles, and is fourth on the all-time list of winnings. He has been European Champion three times and has won tournaments in nine different countries including China, Dubai, Monaco, Thailand, France and Belgium. He is also one of four players to have scored more than 200 centuries in tournament play and the only player ever to have won all four matches at Pontins.

John's other sporting passions are horse racing (although at 6'2 tall, his enthusiasm remains strictly off the saddle!), golf and football. He is a keen Everton fan, but also likes to see Liverpool doing well. John also makes after-dinner speaking appearances.

He is heavily involved in charity work, and acts as patron of four charities - Lasers for Life, Alder Hey Children's Hospital, Merseyside Family Support Unit and the McMillan Nurses. In 1996 he was awarded an MBE.

When he's not spending the remainder of his time making guest television appearances or attending functions, he enjoys spending time with his wife and two children and eating his favourite Chinese and Italian foods.