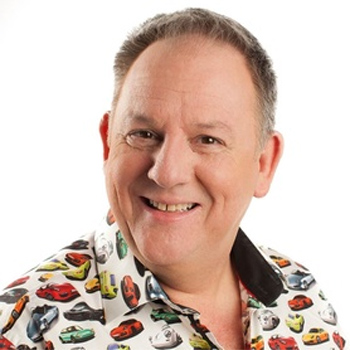 John has a B. Ed. in Drama & English from Bretton Hall College and a Post Graduate Diploma in Costume Interpretation from Wimbledon School of Art.

He worked in rep theatre as a pattern cutter and wardrobe supervisor at Mold York and Colchester followed by a stint in the West End making costumes for the ill-fated Seven Brides for Seven Brothers.

He then moved on to 20th Century costumes as production manager running both London and then New York offices after which he became a freelance working on such great shows as Poirot and the Catherine Cookson epics.

He was then discovered by Hollywood and worked as costume supervisor on Interview with a Vampire, Four Weddings & A Funeral, Notting Hill, three James Bond films, Tomb Raider and Butcher Boy just to name a few.

John was then asked to appear on the Clothes Show and never looked back. He went on Richard and Judy for one show in January 2000 and never left! He was the resident fashion expert on This Morning.

He performed his own one man show in the West End to packed houses and standing ovations.

John has also covered many red carpets interviewing all sorts of stars from Harry Potter to J-Lo and filmed with Jackie Collins in L.A. which achieved huge ratings and much critical acclaim.

He has commented on many a vox pop re fashion styles and even criticised Cherie Blair on the Six O'Clock News!

John has appeared on numerous shopping channels and was one of the contestants taking on Fern Britten in the Christmas Ready Steady Cook special.

He appears regularly on radio he's been side kick to Carol McGiffin and Jenny Eclair on LBC.

John's next two challenges are to learn to sing and to complete his novel, a murder mystery set in the backdrop of a daytime TV studio.