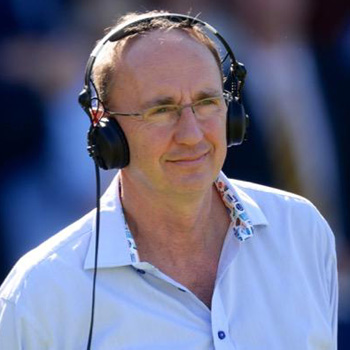 Jonathan Agnew's career as the BBC's cricket correspondent has been so successful, it's easy to forget that he ever played the game. But, as a thrusting seam bowler in the 1980s, he played three Tests for England before taking up his position in the commentary box.
Agnew embodies the authoritative, but endearingly juvenile approach of the Test Match Special team, and as a player he was always looking for the fun element of the game. When conditions were in his favour, Agnew could be genuinely quick, although he abandoned out-and-out pace in favour of more control in 1987, and enjoyed his best season with 101 wickets for Leicestershire.
The most consistent English pace bowler in county cricket in 1987 and 1988, he was ignored by selectors despite a dearth of fast bowling talent. Agnew was drafted into the Leicestershire side in 1978 on the back of an excellent season for Uppingham (37 wickets at 8) and he took a wicket with his fourth ball in first-class cricket.
In 1984 he won his first caps, against West Indies and Sri Lanka, and the following summer made his final appearance, against Australia. He struggled in all three games. In 1987 he began work as a sports producer with BBC Radio Leicester, in 1988 wrote an entertaining book on the life of a county pro - Eight Days A Week - and in 1990-91 covered England in Australia for the now defunct Today newspaper. Later that year he retired at the age of 30 on being appointed as the BBC's cricket correspondent. He had one last day in the sun. In 1992 he answered a plea by an injury-strapped Leicestershire to appear for them in the NatWest semi-final; he took 1 for 31 in 12 parsimonious overs to help to his old side through to the final.
Read More