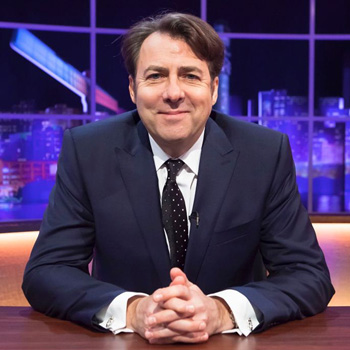 Jonathan began his media career as a researcher on the Channel 4 chat show Loose Talk. Various other documentaries and shows followed before he began working on Soul Train. It was whilst working on the show that he met researcher Alan Marke and the pair came up with the idea of The Last Resort and their own production company.

In 1987 Channel X was born. Finding themselves short of a satisfactory host Jonathan stepped in, literally as 'the last resort', and made his television presenting debut in January 1987. The show was a hit and broke the mould of the traditional TV chat show in this country; as a result, Channel 4 commissioned a total of four series.

Jonathan's radio career began in 1987 when he filled in for Janice Long on Radio 1 for two weeks. He then went on to host a flagship show on Richard Branson's first radio station, Radio (the fore-runner to Virgin Radio) in 1988. Jonathan was also a regular contributor on Radio 4's Loose Ends from 1987 to 1989. In 1998 he teamed up with Chris Evans to host a flagship show for the new-look Virgin Radio, The Jonathan Ross Show.

Jonathan's prolific television career as a presenter has included: The Incredibly Strange Film Show (1988-1989); One Hour with Jonathan Ross (1990); For One Week Only (1991); Tonight With Jonathan Ross; Saturday Zoo; Gag Tag (with Frank Skinner); Mondo Rosso; The Late Jonathan Ross (1996); In Search Of...; The Big Big Talent Show. In 1991 and subsequent years Jonathan has compered the British Comedy Awards.

In 1999 Jonathan became Barry Norman's successor to the BBC One flagship film show. He now hosts his own chat show on BBC1 and the game show It's Only TV... But I Like It.

In May 2003 Jonathan picked up two Sony Awards for his work in the radio industry. He won best entertainment presenter and the special 2002 award for achievements over the year.

In March 2005, and for the second year running, Jonathan was awarded the prestigious Television and Radio Industries Club awards for Best Radio/Digital Radio Personality of the Year. Even the likes of Nicky Campbell and Jeremy Vine were not enough to unperch him.

In June 2005, Jonathan became Jonathan Ross OBE, and was voted the most powerful man in broadcasting. Something he denies so obviously we must all agree with him.

Jonathan has been involved in several controversies throughout his broadcasting career. As a result, in 2008 he wrote a semi-autobiographical work titled Why Do I Say These Things?, detailing some of his life experiences.
He is known as an avid fan and collector of comic books and memorabilia, and has written his own comic books, Turf and America's Got Powers. Ross is known for his distinctive voice, flamboyant style of dress.

Jonathan lives in north London with his wife Jane, their three children and a menagerie of pets.
Read More